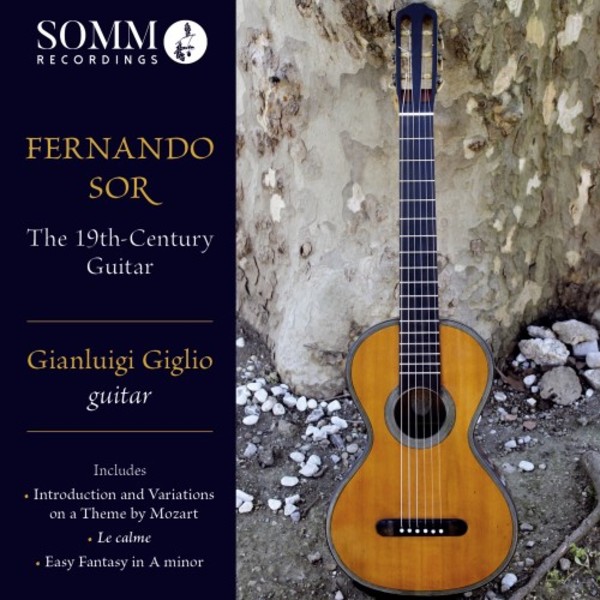 The acclaimed Italian guitarist Gianluigi Giglio makes his debut on SOMM Recordings with The 19th-Century Guitar, a scintillating recital of music by Fernando Sor, a pioneering champion of the guitar in the vanguard of raising its profile out of the tavern and into the concert hall.

Giglios wide-ranging recital explores Sors innate feeling for the guitar and charts the increasing demands he placed on the instrument in a body of work that transformed its standing with public and pundits alike.

From the early Op.9 masterpiece that charted a new and expressive landscape for the guitar  Introduction and Variations on a Theme by Mozart  to the late Elegiac Fantasy, op.59, with its leanings towards newly-emerging Romanticism, this is a textbook display of the instruments many abilities given eloquent voice by a master guitarist.

Other notable pieces include the Introduction and Variations on Malbrough sen va-t-en guerre, op.28, a deliciously knowing exercise in re-creating 18th-century style, the possibly unique programmatic caprice Le calme, op.50, and the no less singular étude The movement of a religious prayer from the 24 Progressive Lessons for Beginners, op.31, which is distinguished by its beautiful sense of polyphony.

Gianluigi Giglio plays a guitar made by the noted Parisian luthier René Lacôte in Paris in 1834.

SOMMs previous recordings of Fernando Sor include Eros Rosellis recital Studies for Guitar (SOMMCD021) and 12 Seguidillas performed by Craig Ogden on a disc of Spanish Songs featuring soprano Patricia Rozario (SOMMCD078). Commenting on the Seguidillas, Allmusic.com said: With their juxtaposition of compact, melodramatic songs and
comic numbers they would entertain any crowd.