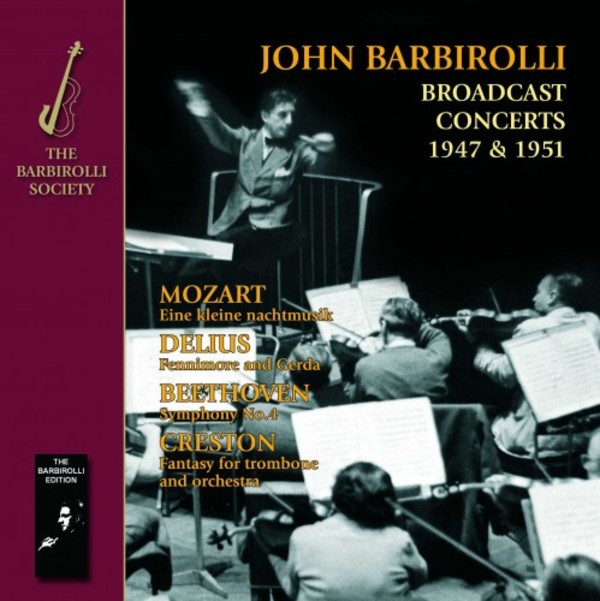 The broadcast concert by the BBC on Friday, 5 December 5, 1947 by the Hallé Orchestra under John Barbirolli (two years before his knighthood for services to music) might appear straightforward in terms of repertoire.

The programme begins with one of the most well-known pieces of classical music, Mozarts Serenade no.13 for string orchestra, Eine kleine Nachtmusik. Barbirollis performance is ideal in terms of tempos and internal balance  as befits, naturally, a musician who above all was a string player of no little distinction himself.

One wonders if it was Barbirolli himself, or a BBC Music Department producer, who chose the Intermezzo from Deliuss last opera, Fennimore and Gerda, which follows the Mozart. In any event, it was an appropriate choice, for although the orchestra Delius asks for in the course of his opera is a large one (with triple wind and two harps), the Intermezzo is heard in the version for smaller orchestra, made by the composers amanuensis Eric Fenby in 1936.

It is a matter of regret that Barbirolli never recorded all nine Beethoven symphonies commercially. It is through surviving broadcasts that we may more fully appreciate his profound understanding of the symphonies, which form the backbone of the international orchestral concert repertoire. To many music-lovers the preservation of Barbirolli conducting Beethovens Fourth symphony, a work he was not to record commercially, is hugely valuable, for his reading of this masterpiece deserves serious attention in any study of the conductors work.

On taking up his appointment as conductor of the Philharmonic-Symphony Society in New York in 1936, Barbirolli  for the first time in his career  naturally found himself face-to-face with the music of the United States, a repertoire which  at that time  did not include the later works of Copland, Barber, Roy Harris or Bernstein, and even the concert music of Gershwin had not made much headway in terms of repertoire acceptance.

But Barbirolli did not shirk the responsibilities he felt were incumbent upon holding such a post, and his programmes reveal, during his six-year tenure, a large number of performances of music by American composers. He continued to bring modern American music to British audiences in the years following his return to England.

So our collection concludes with the British premiere in May 1951 of the American composer Paul Crestons Fantasy for Trombone and Orchestra, op.42. This impressive work was commissioned for the noted American trombonist Robert Marsteller by Alfred Wallenstein and the Los Angeles Philharmonic Orchestra, who gave the first performance in 1948.

Throughout the 1940s in the USA the trombone-playing band-leader Tommy Dorsey was enormously popular, having effectively discovered Frank Sinatra in 1938. It was Dorsey who commissioned a Trombone Concerto from Nathaniel Shilkret in 1944, and premiered it with Leopold Stokowski and the New York City Symphony Orchestra. Dorseys popularity did much to raise the profile of the instrument, a popularity raised further by Robert Martsteller. Barbirolli had already programmed Paul Crestons Dance Overture twice, and needed no second-bidding to consider the new Trombone Fantasy, as played here by the superb Hallé artist Maisie Ringham.