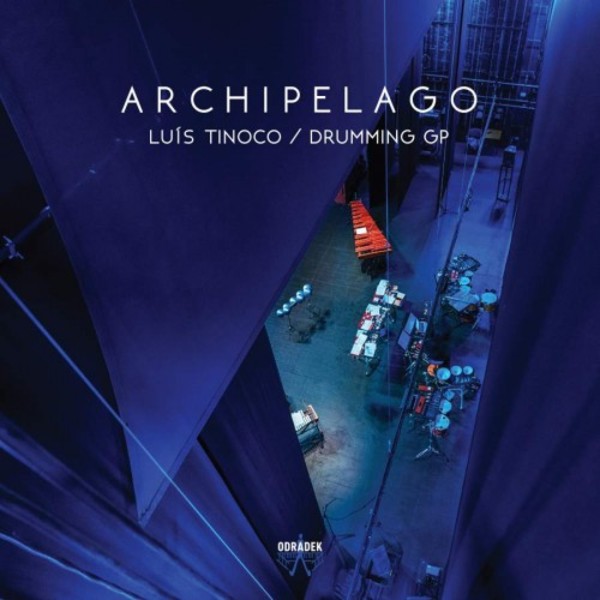 Archipelago features vibrant and colourful works for percussion ensemble, including Short Cuts, originally written for the Apollo Saxophone Quartet and then rearranged by the composer, and Mind the Gap for solo marimba, a work inspired by travelling around London. Genetically Modified Fados and Zoom in  Zoom out were both commissioned by Drumming Grupo de Percussão. Genetically Modified Fados features pre-recorded sounds as well as exploring the elemental Fado style of Portugal, while Zoom in  Zoom out subtly evokes the rhythms and melodies of Brazilian popular music. Ends Meet is a cyclical work for marimba and string quartet, and the eponymous recent work Archipelago, dedicated to the albums skilful conductor, Miquel Bernat, combines vibraphone with partially-tuned wah-wah tubes, creating fascinating microtonal effects.

Steel Factory is a thrilling work for steel drum ensemble, and is dedicated to Drumming Grupo de Percussão, a group established 20 years ago in 1999, since when it has become one of the most original and dynamic contemporary music projects on the Iberian Peninsula. In Portugal, the group quickly became popular with audiences, musicians and cultural centres, playing in theatres and music festivals all over the country. This popularity soon spread to reach an international audience.

Luís Tinoco is a graduate of the Escola Superior de Música de Lisboa. He gained a Masters degree at the Royal Academy of Music, becoming an Associate of the Royal Academy of Music (ARAM) in 2016, and a PhD from the University of York. His catalogue includes chamber music, orchestra, opera and ballet. Recent commissions include pieces for the Orquestra Gulbenkian, the Sinfónica Portuguesa, the Sinfónica do Estado de São Paulo (OSESP), the Seattle Symphony and LOrchestre Philharmonique de Radio France, and his music is published by the University of York Music Press. Award-winning percussionist Miquel Bernat was the founder of the Ictus Ensemble of Contemporary Music in Brussels, plays with the Rosas Dance Company of Anne Teresa de Keersmaeker, and has worked with the Barcelona Orchestra and the Royal Concertgebouw Orchestra. In 1999 he founded Drumming Grupo de Percussão.

Praise for The Blue Voice of the Water on Odradek:  deftly melds the sounds of piano cluster, clarinet, cymbal and strings; the resultant orchestral aggregate recalls Ligeti without the atonal harshness and gives the impression of light glimpsed from far underwater Lucid engineering allows us to appreciate the colouristic detail in full - Gramophone