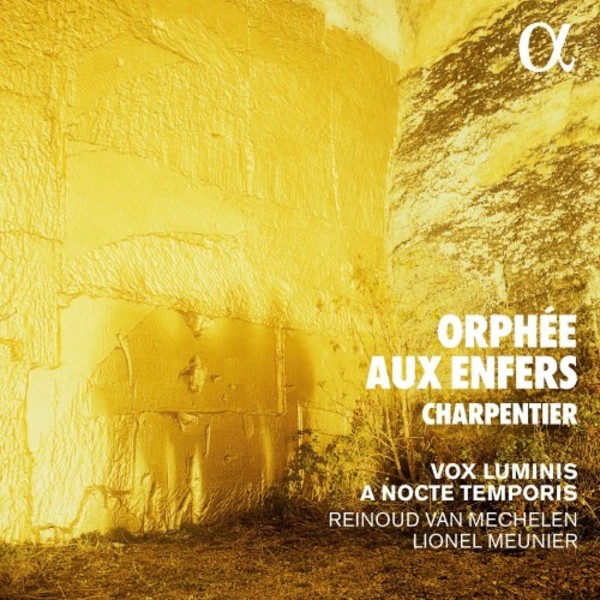 The Orpheus myth was as important for the birth of opera in France as it had been in Italy. In 1684, Charpentier composed a work for three voices, Orphée descendant aux Enfers. With this piece, remarkable for its style and concision, he showed how well he had assimilated Carissimis art. It is a dramatic scene, similar to the sacred histories of the Roman master. The text, by an unknown author, narrates Orpheuss quest for his beloved in the Underworld. The heros haute-contre gives him an elegiac timbre  this was the vocal register in which Charpentier, himself a singer, excelled. In 1687 he created his second illustration of the myth, La Descente dOrphée aux Enfers. In its two acts can be discerned the outline of a possible complete opera  the manuscript has reached us shorn of the third act in which Orpheus would presumably have lost Eurydice before being devoured by the Maenads. While La Descente dOrphée has already been recorded several times, the Orphée of 1684 is a rarity and a magnificent discovery. In these two roles that might have been written for him, Reinoud van Mechelen is at the peak of his artistry, while his ensemble A Nocte Temporis and Lionel Meuniers group Vox Luminis blend in perfect symbiosis.

Since the dawn of opera in the late sixteenth century, the Orpheus myth has proved an exceptionally fertile subject for composers and librettists. And little wonder: the story is as much about the power of music as the power of love, offering rich opportunities to celebrate the very medium through which it was presented. The first flowerings of Orpheus as an operatic subject occurred in Italy, and it was there, during his studies with Carissimi in the late 1660s, that Marc-Antoine Charpentier doubtless fell under its spell, yet it was not until the mid-1680s that he produced two Orphic works of his own. The second of these, a pastorale-style entertainment whose two surviving acts take the story as far as Orpheus claiming Eurydice from the depths of Hades (but not the fateful journey back from the Underworld), is surely incomplete. Entitled La Descente dOrphée aux enfers (1686-87), it was designed for staged performance in the luxurious apartments of the Mademoiselle de Guise at the Palais de Luxembourg and has been recorded several times, notably by William Christie and Les Arts Florissants. A few years earlier, Charpentier had composed an altogether more intimate work, a three-voice cantata entitled Orphée descendant aux enfers (1684), which focuses on Orpheuss encounter on his way down through the Underworld with the perpetually damned figures of Tantalus and Ixion. This is more of a rarity on disc but now, thanks to the combined forces of Reinoud van Mechelens A Nocte Temporis and Lionel Meuniers Vox Luminis, the two works appear side-by-side on the Alpha label.

Orphée descendant makes a fine curtain-raiser, its meltingly melancholic Prélude featuring soft-hued flutes (one a recorder, the other a transverse flute) and a solo violin which functions as Orpheuss lyre in the first, purely-instrumental recitative. Reinoud van Mechelen, who takes the title role in both works, has a beguiling, high-lying tenor voice able to meet the demands of the haute-contre tessitura of which Charpentier himself was an exponent. Gentle-toned yet also capable of great intensity and incisiveness, and consistently stylish, its little wonder that Ixion (Philippe Froeliger) and Tantalus (Meunier) succumb to his voices delights. A theorbo continuo adds to the spectral feel as the two shades first respond to Orpheuss appearance, and by the time we reach the final trio the mood has palpably softened, boding well for the continuation of Orpheuss journey.

From this fleeting episode, we move to the larger canvas of La Descente. Scored for ten voices, flutes, viols, violins and continuo, the sonorities are still intimate, with the viols adding an extra timbral dimension, but the scale is altogether more ambitious. The first act presents a pastoral scene with delicate colours and female voices which until now have been absent, and includes the heart-stopping moment when Eurydice (superbly sung by soprano Déborah Cachet) receives her fatal snake bite, Orpheuss initial grief, and his visitation by Apollo (Meunier). This is already quite an emotional journey, from the joyously airy opening to the intensity of mourning, and the combined voices have a splendid impact when used in tuttis. Van Mechelens Orpheus is once again a huge asset, and he really comes into his own in Act 2, which traces his encounters on his journey down through the Underworld. His first number, Cessez, cessez, fameux coupables, accompanied by richly-textured viols, and the response from the shades of Ixion, Tantalus and Tityos, is an early highlight here, as is the frighteningly spiky Entry of Phantoms, with bowed strings playing sul ponticello to spine-tingling effect. Geoffroy Buffières imposing Pluto is lent extra weight by the use of an organ continuo, and is nicely contrasted with soprano Stefanie Trues light-sounding Prosperpine. By the end of the act, Pluto himself has melted to Orpheuss entreaties (cue the flutes again), and the achingly gentle final chorus and instrumental postlude leave us wondering what we might have lost with the lack of a third act.

By any standards the performance is a classy one, the Keyhof Chapel in Huldenberg, Belgium, providing just the right degree of intimacy and warmth, while both singing and playing are exceptionally vivid and moving. Van Mechelen inevitably steals the show, with an Orpheus that at last rivals Paul Agnew (for Christie), supported by a cast of comparable calibre. The added bonus of the earlier cantata, plus full texts and translations, makes this an essential acquisition for lovers of the French Baroque as well as the broader development of early opera. Jointly directed by Meunier and van Mechelen, Vox Luminis and A Nocte Temporis could hardly have wished for a more winning collaboration.

Orphée descendant aux enfers, usually described as a cantata, is more like an operatic scena. ... Reinoud Van Mechelen declaims eloquently, rising to more passionate heights in the second air, Vos plus grands criminels. ... The music for the viols [in La descente dOrphée aux enfers] is simply ravishing, and its beautifully played. Van Mechelen sings powerfully, with more than a touch of desperation. ... anybody wanting these two pieces together need not hesitate in investing in these splendid new versions from Lionel Meunier and his team.  Richard Lawrence
Gramophone March 2020