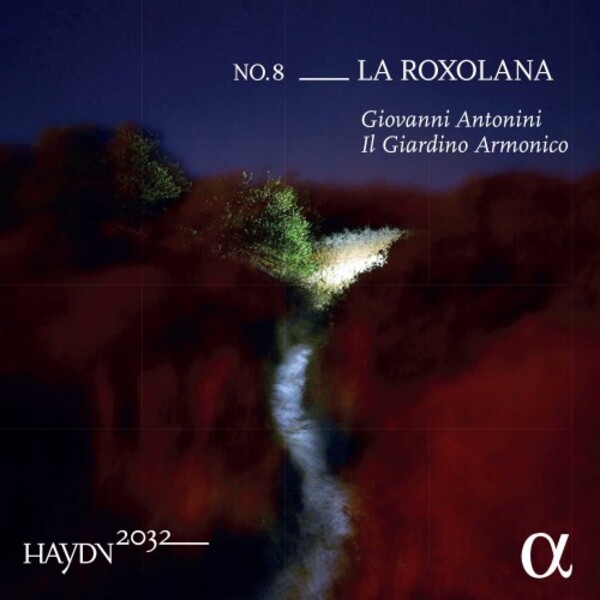 For its eighth volume, Haydn2032 invites us on a musical journey that takes the Balkan route. Of all the Viennese Classical School, Joseph Haydn is certainly the composer closest to folk music, first because he spent his early years in the countryside and also because, unlike his colleagues who worked in the urban centres of the Habsburg monarchy, Haydn was in contact with Croats, Roma and Hungarians throughout his life. These influences were omnipresent in his music, to the delight of Prince Nikolaus I Esterházy and his guests, but by some accounts were not to the taste of many music theorists in Germany. Haydn gave his Symphony no.63 in C major the title of La Roxolana, from the famous sixteenth-century sultana who was the wife of Suleiman the Magnificent after having been his slave. As usual, Giovanni Antonini, who is reunited here with Il Giardino Armonico, juxtaposes Haydns music with that of another composer. The natural choice here was Béla Bartók, who is represented by his Romanian Folk Dances, composed in 1917.

As in the previous volumes, the orchestral playing is breathtaking in its accuracy  the sort of Haydn playing you dream of  Gramophone, Editors Choice (Vol.4)

It is electrifying: bracing in the allegros, never dawdling in slow movements.  Sunday Times (Vol.6)

As Giovanni Antoninis project to record the complete Haydn symphonies by the composers tercentenary in 2032 inches forward, the advantages of this patient approach (issued one disc at a time) become ever more apparent. Its not just that, with duties shared between two orchestras (the Kammerorchester Basel and Antoninis own Il Giardino Armonico) and each recording preceded by a series of concerts, the musicians really get the chance to inhabit the works before committing them to disc. We, the listeners, also have the opportunity to give each symphony its due, each disc imaginatively themed and contextualised, as well as handsomely presented with a series of photos originating from the Magnum agency.

The latest volume, no.8, is a case in point. Entitled La Roxolana after the nickname for Symphony no.63 in C major, it takes an absorbing look eastwards at approaches to the other - the cultures of central and eastern Europe as well as the Near East. From Symphony no.28 in A major, composed around 1765 originally as incidental music for Die Insel der gesunden Vernunft (The Island of Common Sense) at the main Esterházy residence of Eisenstadt, via no.43 (Mercury) composed for summer entertainment at Eszterháza (the Versailles of the Esterházy family), to La Roxelane herself, a character in the play Soliman der zweite (Suleiman II) from which the second movement of Symphony no.63 was taken was taken. These may not be among Haydns best-known symphonies, but each is brimming with character, from the infectious metric ambiguity of no.28s opening movement (is it in 6/8 or 3/4?), the incisive volleys of violin bariolage in the Minuet and the mysterious oriental Trio, via the enharmonic play of no.43s dreamy Adagio, to the swirling semiquavers of no.63s opening Allegro, and the major-minor alternation of the double-variation Allegretto.

Each symphony here finds Haydn at his best, and never mind that some of the works were assembled piecemeal, for each has the stamp of developing mastery and genius. Antonini and his musicians do them proud, with strings buoyant and nimble in the faster movements, velvety-soft in the con sordino slow movements. Woodwind are naturally balanced rather than spotlit, while the natural horns cut through the textures splendidly, adding a real edge to the sound, especially where Haydn calls for the orchestra to let rip. Phrasing and dynamics are beautifully shaded without being overthought, and, as with previous releases in this series, its the sheer quality of the musicianship that impresses the most, alongside Haydns fabulous inventiveness and wit.

The couplings are provocative but work supremely well, filling in the gaps between Eszterháza and the Near East. The 17th-century Sonata jucunda, once thought to be the work of Biber, is a joke piece celebrating the folk music of the Haná region in the Czech lands, with mimicking of village music playing styles (right down to ensemble going awry!) and some distinct oriental flavouring that serves as a reminder that the region was on an important trade route. The musicians of Il Giardino Armonico have a high old time, strings sliding from note to note, and oozing with faux-Turkish flavours. Before that we have Béla Bartóks ever-popular Romanian Folk Dances in their orchestral version; daringly performed by the historic instruments of Il Giardino Armonico, and with Antonini himself doing the honours on chalumeau (rather than clarinet) and Renaissance traversa (rather than flute), this performance feels really steeped in authentically gritty folk style, the chalumeau adding some deliciously naughty jazz-style note-bending, while the strings go absolutely hell-for-leather in the final fast dance, bouncing their bows with tremendous gusto. Alongside this, the courtly music of Papa Haydn sounds almost strait-laced  and yet, somehow, it all works, thanks to the commitment of Antonini and his band. This is definitely one of the most ear-catching discs in the series so far, and if later issues come close to this standard then the next dozen years will spoil us rotten.

... broadening its scope is the wonderfully vigorous series Haydn 2032, under Giovanni Antonini, which reaches No 8, La Roxolana (Alpha). Previous instalments have included pieces by Haydns contemporaries, but this one rushes forward to Bartók. His Romanian Folk Dances are decorated with the folksy sounds of the chalumeau, alongside a quirky, multi-movement Sonata Jucunda, a discovery from the Kromeriz archive. Three Haydn symphonies receive spiffingly energetic performances from Il Giardino Armonico...  Nicholas Kenyon
The Observer 23 February 2020

These are invigorating, polished performances of three beguiling middle-period symphonies, the latest instalment in Antoninis Haydn2032 project. ... Antonini partners them with a bizarre anonymous Moravian-influenced Sonata Jucunda from the late 17th century, and  period instruments suit it  with Bartoks Rumanian Folk Dances, whose naughtily added parts for Renaissance flute and chalumeau (the clarinets precursor) he plays himself.  Stephen Pettitt
The Sunday Times 2 February 2020

All this music is played with dynamic panache, along with the sensitivity and delicacy all noted as characteristics of earlier issues. With well-judged tempos and acute balance enabling part-writing to be revealed in translucent textures, these are performance that convey a spirit of fresh spontaneity, while at the same time giving full value to every single bar.  Brian Robins
Early Music Review 19 February 2020