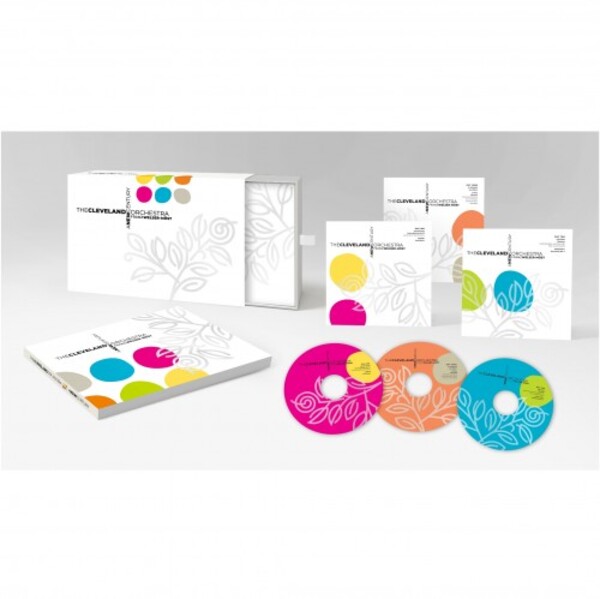 Three pairings of works make up the The Cleveland Orchestras A New Century collection, available as a three-disc deluxe box set with a 150 page companion book.

All these recordings were made in the intimate acoustics of Severance Hall, and pieces on the set include Beethovens Opus 132 late string quartet, performed in a unique arrangement for string orchestra, Edgard Varèses wildly noisy 1928 orchestral portrait of New York City, Amériques, Richard Strausss first tone poem, Aus Italien, and Sergei Prokofievs Third Symphony. Two world premiere recordings are also included, of Stromab by Johannes Maria Staud and Richard Bernd Deutschs concerto for organ and orchestra, Okeanos; these first-ever recordings of these pieces continue The Cleveland Orchestras longstanding commitment and abilities with new musical scores.  (In both instances, the recordings document The Cleveland Orchestras United States premiere of each work.)  Both Deutsch and Staud have served as composers-in-residence through The Cleveland Orchestras Daniel R. Lewis Young Composer Fellowship program. Organist Paul Jacobs is the featured soloist in Deutschs organ concerto.

These six musical selections showcase the range of the Franz Welser-Möst & Cleveland Orchestra partnership  now in its 18th year.  Welser-Mösts contract was extended in 2019 to run through 2027, carrying him past George Szells legendary status as the longest-serving musical leader in the ensembles history.

The Cleveland Orchestra has a long and storied catalogue of recordings, providing testament to the ensembles ongoing and evolving artistry, says André Gremillet, President and CEO of the Orchestra. As we launch a new series of recordings on our own label, this inaugural set documents the remarkable abilities and achievements of this ensemble under Franz Welser-Mösts leadership. The repertoire has been chosen to highlight the breadth, depth and great artistic partnership between Franz and the Orchestra, with a particular focus on 20th and 21st century music.

Each pairing places an older and contemporary work together, showcasing a kind of juxtaposition that Welser-Möst often uses in programming to help concerts act as musical journeys for the listeners.  I believe that every concert is as much about creating an emotional journey for the audience as it is a musical one, says Cleveland Orchestra Music Director Franz Welser-Möst.  An orchestras technique and artistry are not just about serving the music as an art form, but creating a special experience in performance.

In my career, I have found no better place in the world to work and create music than here in Cleveland, with The Cleveland Orchestra, says Welser-Möst.  From the beginning, I have been inspired by the musicians and the support and keen interest that the entire Cleveland community provides their Orchestra.  The six pieces on this new album are just a sampling of what we have accomplished together.  We have an exciting opportunity going forward, as we choose additional music to offer the world through recordings on our own label.

Included with the deluxe box set is an extensive 150-page companion book which explores continuity and change at The Cleveland Orchestra, across musical leaders, changes and enhancements to the ensembles home concert hall, and the rock-steady influence of a hometown community that constantly demands and responds to great musicians playing great music with new and refreshing perspectives.