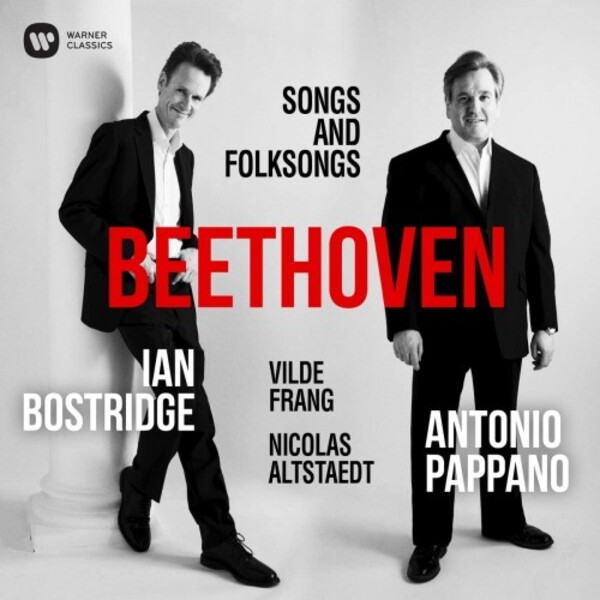 At the heart of this programme of Beethoven songs performed by Ian Bostridge and Sir Antonio Pappano is the song cycle An die ferne Geliebte (To the distant beloved). Bostridge describes it as the distillation of Beethoven as lover. Among the other items are the rapturously lyrical Adelaide, the sombre In questa tomba oscura and a selection of Beethovens settings of folksongs from the British Isles, which elicit the participation of violinist Vilde Frang and cellist Nicolas Altstaedt. When we all play together, says Pappano, its like a family making music at home.

Its perhaps not surprising that Beethovens achievements as a writer of songs are often overlooked. On the one hand, his revolutionary impact on the established genres of symphony, concerto, piano sonata and string quartet issued challenges to all his nineteenth-century successors. On the other, the nascent genre of the German-language art song (or Lied) came to its first full fruition at the hands of his younger contemporary, Franz Schubert. Yet Beethovens song settings, which occupied him on and off from the 1790s to around 1816, form an important part of his output, a necessary counterbalance to the image of the Promethean, heroic genius that dominates popular imagination, and they offer a window into the more intimate facets of his character.

Few singers recognise this better than the ever-cultivated tenor Ian Bostridge, and on his latest disc from Warner he and his pianist, Antonio Pappano, offer a splendid overview of Beethovens art as a song composer. They open with the work that has strong claims to be the first ever song-cycle, An die ferne Geliebte (To the Distant beloved) of 1816. A collaboration between Beethoven and the poet Alois Jeitteles, this collection of six songs is through-composed, with links between the songs ranging from pivotal chords to sudden upsurges in tempo and even dove-taling of musical material. It begins with perhaps the most artless of all gestures, a simply-stated E flat major chord before the voice enters  as clear an indication as any of the almost naive simplicity that so often characterises Beethovens artistry in all these works. Bostridges fastidious attention to the text brings to life the rich nature imagery, as does Pappanos vividly attentive, collaborative playing (like Bruno Walter and Wolfgang Sawallisch before him, he knows just how to inflect detail without distracting from the singer). With nuances expertly pointed, the mountains, brooks, clouds and meadows that separate the singer from his beloved are lovingly drawn, while the return to the music of the opening in the latter stages of the final song is accompanied by an ecstatic accelerando that is tremendously engaging.

Then follows the Italianate grace of Adelaide, composed in the mid-1790s to a text by Friedrich von Matthisson, its varied repetitions of the beloveds name evoking a wide range of emotions. Beethovens setting has come in for some stick from sniffier critics, but Bostridge and Pappano turn in a performance that is completely beguiling, subtly nuanced yet without feeling in the least affected. Four versions of Goethes much-set Sehnsucht (Longing) give an insight into the Beethovenian workshop, as if the composer couldnt decide on which particular version to opt for (a note on the autograph manuscript reads NB: I did not have enough time to produce a good one, so here are several attempts). Goethe was a favourite poet for Beethovens Lieder, and the Song of the Flea from Faust prompted one of his finest, treated here to a performance of sparkling wit, complete with crushed notes as the pianist tries to squash the troublesome insect on the piano keys.

Theres an appropriately haunted, sepulchral quality to In questa tomba oscura, which sets an Italian text by Giuseppe Carpani, and Bostridge gives a final twist of the knife right at the end. What a contrast with Goethes Maigesang (May Song), where Bostridge and Pappano seem to exude classical charm (not for the first time, Pappanos playing on a modern piano has welcome hints of period fortepiano manner to it). Matthissons Andenken (Remembrance) has a similarly sunny aspect, while in Paul von Haugwitzs Resignation (set in 1817) it is the momentary hesitations that speak volumes.

Another highlight of this album is a generous selection of the Scottish and Irish folksong settings made for the Edinburgh publisher George Thomson between 1810 and 1818, primarily as a money-making exercise but nevertheless with customary professionalism, care and attention to detail. Here Bostridge and Pppano are joined with ad lib. parts from violinist Vilde Frang and cellist Nicolas Altstaedt (luxury casting!) in performances that, at their best (as in The pulse of an Irishman and Come draw we round a cheerful ring) have more than a whiff of the tavern to them. But Bostridge is arguably at his best in the more reflective numbers, including the almost operatic intensity of the Burns setting The lovely lass of Inverness. Eight folk songs in total are performed: just about the right number for easy digestion!

To round things out, Marmotte (a humorous take on market chatter from Goethes dramatic scene Das Jahrmarktfest zu Plundersweilen) is perfectly pitched as a lighthearted encore, with Pappano evoking a hurdy-gurdy player, and Bostridge clearly relishing the misplaced accents and broad marketplace French idioms. If you feel like youve overdosed on heroic Beethoven recently, this is the perfect corrective, a hugely enjoyable and rewarding disc from start to finish.

[Bostridge] and Pappano are terrific in the Song of the Flea and offer what feels like a fascinating glimpse into the composers workshop with his four Sehnsucht settings, presented consecutively.  this is a valuable and persuasive album from this high-profile duo.  Hugo Shirley
Gramophone August 2020

Settings of Goethe texts include the half-crazed Song of the Flea from Faust and the heartfelt Sehnsucht (Longing), the latter used four times by Beethoven and by countless other composers. Bostridge and Pappano handle both the wriggly wit of the first and the barely suppressed anguish of the second with customary grace.  Fiona Maddocks
The Observer 19 July 2020