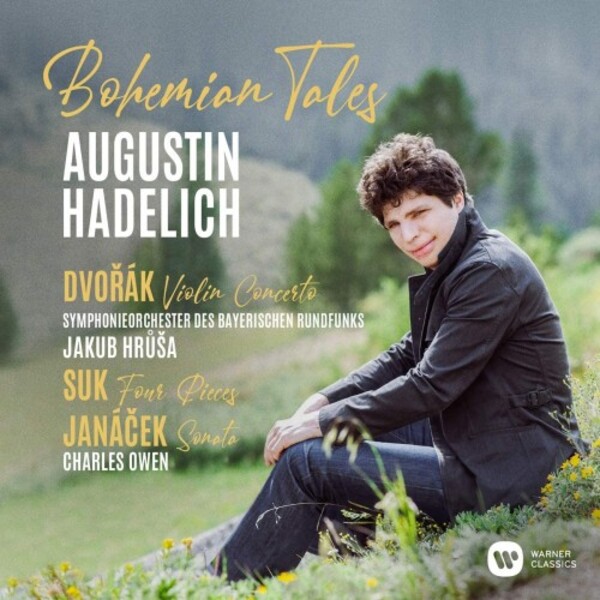 Mr Hadelich increasingly seems to be one of the outstanding violinists of his generation, wrote the New York Times after Augustin Hadelich played Dvořáks Violin Concerto under Czech-born Jakub Hrůas baton in 2017. Hadelich and Hrůa have now recorded the concerto with the Symphonieorchester des Bayerischen Rundfunks. Bohemian Tales pairs the concerto with works for violin and piano by Dvořák and two other major Czech composers of the late-19th/early-20th centuries, Leos Janáček and Josef Suk. The pianist is Charles Owen.

Still only in his mid-30s, violinist Augustin Hadelich has already made notable recordings of the great concertos by Mendelssohn, Tchaikovsky, Brahms and Sibelius, together with works by Dutilleux, Ligeti, Adès, and much else beside. But his latest disc, entitled Bohemian Tales, may well be one of his finest yet. It takes as its starting point the Violin Concerto by Dvořák, one of the loveliest in the repertoire. With its tantalisingly curtailed first movement, achingly beautiful central Adagio, and ebullient, folk-infused Finale, its a work that oozes Czechness, and its followed up here with a programme of music for violin and piano that explores the music of two of Dvořáks closest compatriots

Dvořák wrote the Violin Concerto in 1879 just as he was reaching the height of his compositional powers, with the first set of Slavonic Dances already published, and the works pedigree shows in this tremendously classy performance. The main material of the first movement is gloriously forthright, with plush, rock-steady support from the Bavarian Radio Symphony Orchestra under the expert guidance of Jakub Hrůa, yielding only to the uniquely beautiful subsidiary ideas and (when it eventually emerges, never to be heard again just after the six-minute mark) the jewel of a second subject. Theres a command of detail here (from both soloist and orchestra) that is hugely involving, and yet it never obscures the works long-term trajectory: shaping and phrasing are immaculate, the tonal palette exceptionally rich.

After the first movements brief development and partial recapitulation, the crucial transition to the slow movement is unerringly pitched, while the Adagio, the heart of the work and of this performance, is played as if held close but not cloyingly so. Every detail registers: the agitated exchanges between soloist and first horn have an urgency to them, but theres a hushed stillness to the E major passage at 4:56, and the violins filigree decoration before the martial-tinged F minor interruption (the spirits of Czech legends roused from their slumbers?) has rarely been delivered as tellingly as it is here. The myriad twists and turns each seem to tell a story under Hadelichs fingers; justification enough for the albums seemingly generic title. As for the Finale, both soloist, conductor and orchestra are completely in their element, and theres a sense of shared joy, with textures lit from within, gossamer-light details in the airier passagework, but also a folklike earthiness as the performers know exactly when to dig in their heels. Theres no need for a helter-skelter dash to the final chord when the pacing is as well-judged as it is here.

The heart-on-sleeve Larghetto from Dvořáks Four Romantic Pieces, op.75, its bursting emotions almost concerto-scaled in this big-boned performance, help to negotiate the move to a chamber setting for the rest of the programme. Janáčeks Violin Sonata (1914-22) had a tortuous compositional history, its earliest stages written against the background of the outbreak of the Great War when the composer had real hopes of the Russians coming to rescue of the oppressed Czechs, but youd never guess that there was so much struggle to achieve its final form from this gloriously assured performance. Everything, from the moments of fleeting lyricism to the obsessive ostinatos and the disruptive pauses and changes of direction, seems in its rightful place, a masterpiece of early musical modernism. Theres just the right hint of bittersweet storytelling atmosphere in the second movement Ballada, Charles Owens deft piano playing doing much to conjure up the otherworldly atmosphere. In the Slavic-tinged Allegretto that forms the scherzo movement, there are palpable hints of Janáĉeks opera Káťa Kabanová (1920-21), including its burden of hidden regrets, while the closing Adagio, with its sudden salvos of violin gunfire, encompasses a huge tonal and emotional range before its eventual subdued close.

From the closing bars of the Janáĉek, the opening bars of Josef Suks Four Pieces, op.17 (1900), for violin and piano emerge in a brilliant trompe loreille. Suk, Dvořáks pupil and son-in-law, inhabited a very different soundworld from Janáĉek: lushly late-Romantic, with a sure feel for richly-scored lyricism containing layers of turn-of-the-century angst. The juxtaposition here is surprisingly effective, with Hadelich and Owen highlighting the fabulous textural details of Suks writing just as they had in the Janáĉek. Theres a fantastical flavour to the lively second movement Appassionato that gives way to a spellbinding trio, while the third movement with its harp-like accompaniment has echoes of the composers recently completed orchestral Pohádka (Fairy Tale). The closing Burleska transforms the same musical material into the sort of nightmarish vision that became one of the composers specialities, and its delivered here with fantastic nimbleness and assurance by both players, the semiquavers scurrying about with tremendous glee.

Rounding off this generously-filled disc are Hadelichs own beguiling arrangement of Dvořáks ever-popular Songs My Mother Taught Me, its soft-hued tearfulness magnified in import by the music that has gone before, and Fritz Kreislers transcription of Dvořáks G flat major Humoresque, making a thoroughly satisfying conclusion to an imaginatively conceived and brilliantly performed release thats guaranteed to lift the spirits.