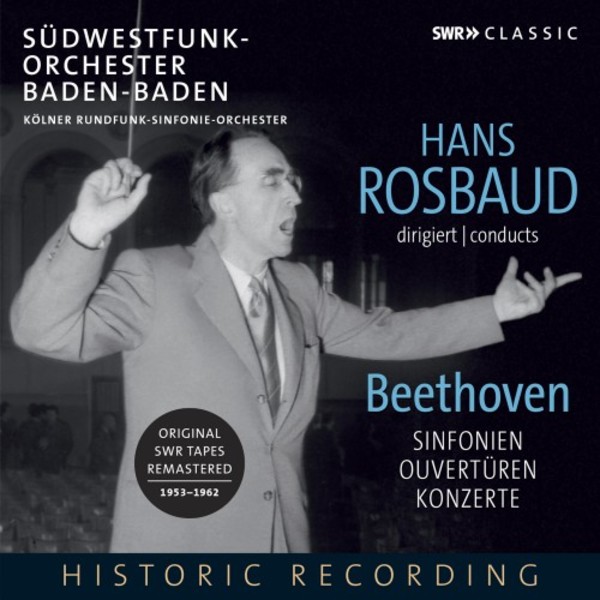 As part of the celebrations marking the 250th anniversary of Beethoven s birth, this is a new instalment in the SWR Classic series dedicated to the recordings of Hans Rosbaud.
Rosbaud s ability to combine a structural approach with musical brilliance, urgency with poetic magic, austerity with inspiration, is a source of deep admiration, not least in the works of Beethoven, The more one focuses on the nuances of Rosbauds artistry, the more one admires his ability to convey precise ideas to the orchestra without compromising vivacity, verve and spontaneity. These Beethoven recordings prove beyond doubt that Rosbaud was one of the greatest musicians and conductors of the 20th century. This is equally true when providing concerto accompaniments: from supporting the Trio di Trieste s enthusiastic playing in the Triple Concerto, to the titanic brilliance of Ginette Neveu in the Violin Concerto, and to Géza Anda s faultless execution of the Fourth Piano Concerto. Under Rosbauds direction, the orchestra performs minute details to perfection, with exciting touches that still remain faithful to the character of the music. Beethoven s structural contrasts achieve an overall homogeneity.
The box set contains several first releases, including the recording of the Eighth Symphony with the Kölner Rundfunk-Sinfonie-Orchestra.
Hans Rosbaud was one of the most important conductors of the 20th century. With this series, the SWR Classic label is helping to make his artistic legacy widely available.
Trio di Trieste:
- Dario de Rosa (piano)
- Renato Zanettovich (violin)
- Libero Lana (cello)