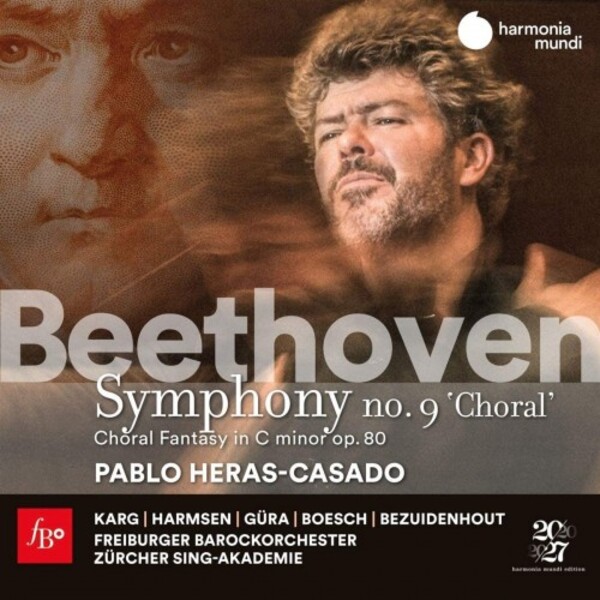 The term iconic is used far too readily these days, but if one piece of music has achieved this status, its surely Beethovens Ninth Symphony. The work that decisively introduced the human voice into the symphonic sphere also inspired much of the Romantic movement in music. And the subject of the finales text (from Schillers Ode to Joy), with its themes of universal brotherhood and a benevolent deity presiding over the whole of creation, set to a tune of instantly memorable simplicity, has led to its appropriation not just by mid-nineteenth-century Romanticism, but particularly (and notoriously) by Wagner, as well as by political and cultural ideologies of the left, right and centre, even entering popular culture in Stanley Kubricks film of Anthony Burgesss A Clockwork Orange.

Any performer tackling the work will be only too aware, not only of the often forbidding presence of the Symphony itself, but of legendary performances by Toscanini, Klemperer, Kleiber, Bernstein, and above all Furtwängler. Yet continually harking back to recordings of the golden age risks atrophy, and in recent years the Ninth has been revivified by the historic performance movement in recordings that can themselves be regarded as landmarks, ranging from the Hanover Band, Norrington and Hogwood to Mackerras, Gardiner, Immerseel, and Krivine, to name just a few.

Any new recording entering such a field needs to be pretty special, and this one from the Freiburg Baroque Orchestra under its frequent and successful collaborator Pablo Heras-Casado certainly is. It reinvigorates the music not just through tempo and the use of old instruments or copies, but also by its thoughtful use of phrasing, shaping, texture and timbre to highlight many telling details in the score. Particularly notable is the way that Heras-Casado, using a moderately-sized orchestra of fifty or so players, allows Beethovens all-important wind lines to be heard with the greatest clarity, keeping the strings in check when necessary. Theres no carpet of sound here, but a constant attention to the musical and expressive needs of the unfolding work, and its a hugely convincing and compelling approach.

The first movement, like much of the performance that follows, is bracing, invigorating and brisk. The opening replaces Furtwänglers sense of cosmic mystery with a sense of more imminent turmoil. The exposition, bold and forthright, is over in what seems like the blink of an eye, but Heras-Casado keeps a firm grip on his brisk tempo. The Handelian dotted rhythms are clipped, exchanges between first and second violins scurrying along, hurling the listener into a turbulent development section. Its a traversal that leaves the listener breathless with excitement, and theres a real feeling of horror when the first orchestral tutti returns fortissimo in the tonic major at the beginning of the recapitulation, one of many thrilling moments.

The Scherzo, normally characterised as demonic, positively skips along, and its easy to hear why early audiences instead found roguish comedy and the wildest mischief in it. Theres virtuosic playing in the pastoral-hued, duple-time trio, not least from the first horn and first oboe, and an unforgettable sense of magic. Its a whirlwind ride, with all the repeats intact. As it hurtles to its close, theres little wonder that, according to some accounts, it was at the end of this movement that the oblivious deaf Beethoven had to be turned round by the contralto soloist to face the tumultuous audience applause at the Symphonys premiere.

In many ways it is the Adagio that is the heart of this Symphony, exerting a huge posthumous influence on Bruckner in particular; yet the term adagio doesnt mean slow but at ease (in the non-military sense). Heras-Casado uses the lack of vibrato in the strings to achieve a sense of stillness, while keeping the tempo flowing, so that the pulse of the Adagio molto e cantabile is almost the same as the alternating Andante moderato, fully in accord with Beethovens persuasive metronome marks. This is a performance that really sings while maintaining the overall momentum of the Symphony as a whole. String tone is beautifully refined string, and theres some glorious solo and sectional wind playing, with stopped horn notes adding to the rich colour palette

The Finale opens with a truly shocking terror fanfare (Wagners term), while the cello and bass recitatives that alternate with reminiscences of the previous movements really do seem to speak with just the right amount of rhythmic freedom. As the famous Ode to Joy theme slowly emerges, one is especially struck in this stylish performance by its classic simplicity (achieved with no little effort on Beethovens part, if the sketches are to be believed). Once the theme takes hold, the movement actually is pure joy: a reprise of the terror fanfare prompts the solo bass to make his groundbreaking entrance, and its difficult to imagine a more accomplished solo team for this period-instrument than soprano Christiane Karg, mezzo Sophie Harmsen, tenor Werner Güra and bass Florian Boesch. The last two in particular are classical Lieder singers of enormous experience who add lustre and insight to both text and music, while the well-balanced voices of the Zurich Sing-Akademie are fearless in the famously challenging choral sections. The Turkish march episode for tenor and male chorus has a jaunty swagger to it, and the following orchestral fugato is urgently compelling. Heras-Casado and his performers expertly negotiate the changes of tempo as the music thrusts towards its close, the crucial moments of text such as Seid umschlungen, Millionen, / Diesen Kuss der ganzen Welt! given due prominence and care. Altogether its an overwhelmingly involving performance, unashamedly direct but also hugely accomplished.

A considerable bonus comes in the form of the Choral Fantasy for orchestra, piano and chorus, composed hurriedly in 1808, sixteen years before the Ninth Symphony. It has come to be viewed as what the fortepianist here, the fabulous Kristian Bezuidenhout, amusingly terms the Ninth with stabilisers, particularly as its main tune (taken from a still earlier song) seems to foreshadow the Ode to Joy theme. The text of the choral closing pages is hardly in the same class as Schiller (as Beethoven himself recognised), yet in this performance bracingly involving performance one quickly forgets such quibbles. Bezuidenhout dispatches the filigree, improvisational solo part with tremendous élan and just the right degree of extempore freedom. The stormy exchanges between him and the full orchestra are particularly enjoyable, and there are some lovely woodwind solos too, before soloists and then chorus bring the work to a rousing conclusion.

Both works could feasibly have fitted onto one disc, but putting them on separate discs means that the listener can enjoy and savour each work on its own merits. As with other releases in this Harmonia Mundi Beethoven series, its all beautifully recorded and presented. At a time when most choral performances are indefinitely postponed, theres a particular poignance to this release in Beethoven Year, and its one that every self-respecting Beethovenian will surely want to hear.