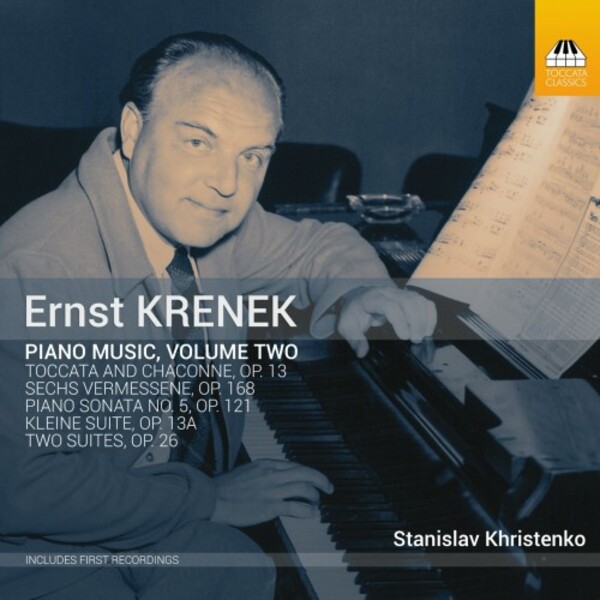 This first extended survey of the piano music of Ernst Krenek (1900-92) continues with a range of works showing his craftsmanship and imagination  and humour. The early Toccata and Chaconne, op.13, has its origins in a joke intended to pull the legs of musicologists and music critics, but it develops into a massive contrapuntal essay of astonishing ambit. Kreneks treatment of Baroque and contemporary dances in the three early suites reveals a fondness for learned whimsy  and that wry dispassion informs even the elegiac and brittle Fifth Sonata, written a quarter-century later in American exile. The closing Sechs Vermessene are kaleidoscopic miniatures with an improvised quality, as if advanced musical modernism were meeting the freest of free jazz.
Krenek absorbed references that at various points encompassed the serialism of Schoenberg, the bite and irony of alternative worlds of 1920s Berlin, and the poetic imagination of bygone times, especially that of Schubert. [...] Khristenkos playing offers suitably cool clarity: he articulates lines for melodic eloquence even when that melodic quality is not obvious, and maintains an admirable lightness of touch. The Fourth Piano Sonata (1948) proves chewy, yet translucent. The George Washington Variations (1950) is an enjoyable set based on a ballroom favourite from 1796, traversing many of Kreneks influences from 12-tone music to jazz.  BBC Music Magazine , December 2015 (Vol.1, TOCC0298)