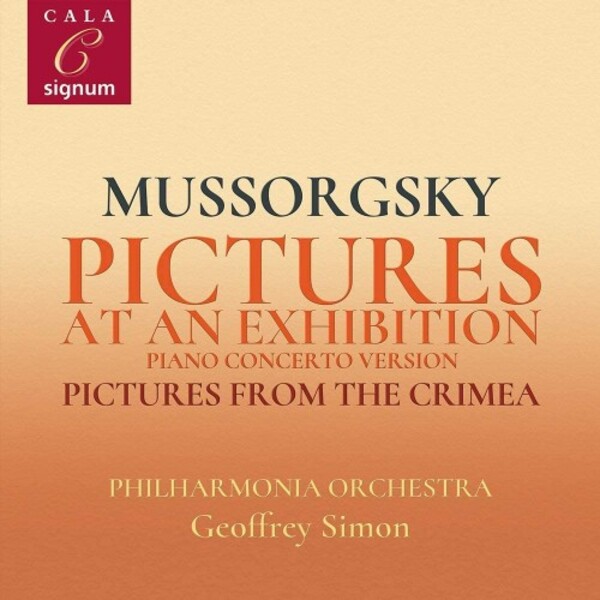 Mussorgsky - Pictures at an Exhbition, Pictures from the Crimea

A Night on the Bare Mountain
Capriccio and Ghourzouff
Khovanshchina

A Night on the Bare Mountain
Capriccio and Ghourzouff
Khovanshchina

Written after Mussorgsky had met Russian artist and designer Viktor Hartmann, Pictures at an Exhibition is by far Mussorgskys most played work. The piece was written when Hartmann gave Mussorgsky two pictures. Hartmann very suddenly died aged 39; following his death, a memorial exhibition was put on in St Petersburg. Mussorgsky donated the two pictures which Hartmann had given him before he died. Mussorgsky is said to have based the piece on his experiences at this exhibition, which was in memory of Hartmann. The concerto version is performed here by Tamás Ungár in an arrangement by Lawrence Leonard.
Australian conductor Geoffrey Simon is resident in London and has appeared there with the London Philharmonic Orchestra, London Symphony Orchestra, Philharmonia Orchestra, Royal Philharmonic Orchestra and English Chamber Orchestra. Internationally, he has appeared with the Adelaide, Atlanta, Bournemouth, Canberra, City of Birmingham, Fort Worth, Melbourne, Milwaukee, Queensland, Sapporo, Shanghai, St Louis, Sydney, Tasmanian, Vermont and West Australian Symphony Orchestras, the Israel, Moscow, Munich and New Japan Philharmonic Orchestras, the American Symphony, the Residentie Orchestra of The Hague, the Tokyo Metropolitan Symphony and the Australian Opera.