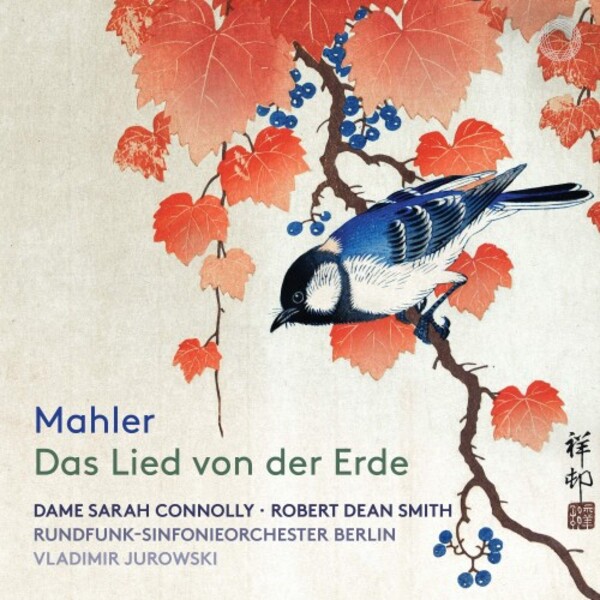 Vladimir Jurowski and the Rundfunk-Sinfonieorchester Berlin continue their exploration of Mahler with a new recording of Das Lied von der Erde, on which Dame Sarah Connolly and Robert Dean Smith provide the vocal contributions. Residing somewhere between symphony and song-cycle, Das Lied is one of Mahlers most profound and loved works, marking an important step in the composers career, as well as in his private life. Jurowski approaches the piece as Mahlers deliberate move from a heroic Beethovenian model towards a more lyrical, Schubertian attitude. Throughout Das Lied, and particularly in the contemplative last movement, Der Abschied (The Goodbye), Mahler seems to come to terms with the mortality of man while celebrating the immortal nature of Life.
The Rundfunk-Sinfonieorchester Berlin has a vast PENTATONE discography. Together with their chief conductor and artistic director Vladimir Jurowski, they have recorded symphonic works from Mahler and Strauss (2017), violin concertos by Britten and Hindemith together with Arabella Steinbacher (2017), and Schnittkes Third Symphony (2015). Robert Dean Smith featured on PENTATONE recordings of Tannhäuser (title role, 2013), Die Walküre (Siegmund, 2013), Die Meistersinger von Nürnberg (Stolzing, 2011), and Der fliegende Holländer (Erik, 2011). Dame Sarah Connolly makes her PENTATONE debut.

It is both the dream and nightmare of every reviewer: one of the greatest pieces in the repertoire, appearing simultaneously in two new recordings, each of which demands attention. Such is the case with two brand-new discs of Mahlers Das Lied von der Erde, widely considered the composers greatest and most personal creation. The Eighth Symphony, which immediately preceded it, may be vaster and more mystical, the Third more all-encompassing, the Fourth more heavenly, the Fifth more direct in its appeal, the Second more barn-storming, the Sixth more tragic, the Ninth and unfinished Tenth more demandingly impenetrable. Yet this Song of the Earth, a genre-defying fusion of song and symphony that confronts Mahlers personal tragedies with a gloriously consolatory celebration of earthly and cosmic eternity, touches the heart and senses in ways that none of his other works do. With its alternating soloists (tenor and alto or baritone) and chamber-like scoring for full orchestra, it has enjoyed an illustrious recorded history, starting with the 1936 premiere recording in Vienna under Bruno Walter (who conducted the very first performance in December 1911, just six months after Mahlers death, as well as several later broadcast and studio accounts). Other celebrated performances from Klemperer, Bernstein, Haitink, Boulez and others have earned their place at or very near the top of the pile, and great singers including Kerstin Thorborg, Kathleen Ferrier, Janet Baker, Julius Patzak and Fritz Wunderlich have become indelibly associated with the score.

Its a formidable ring into which to throw ones hat, but two present-day Mahlerians of considerable achievement and experience now do so: Vladimir Jurowski with the Berlin Rundfunk-Sinfonieorchester, and Iván Fischer with his handpicked Budapest Festival Orchestra. Recorded within a little over 18 months of one another, they even share a tenor, Robert Dean Smith (one of the few currently active Heldentenors able to cope with the parts eye-watering demands), while the alto soloists are Sarah Connolly (Jurowski) and Gerhild Romberger (Fischer), both Mahlerians of great distinction.

In this work above all it is necessary to balance the elegiac and celebratory aspects, the passing and the eternal, the hedonistic and the inward-looking. Both these new accounts achieve this, but with subtle differences of emphasis. Dean Smith is in fresher voice for Fischer (recorded in March 2017), with tiny hints of strain above the stave under Jurowski (October 2018), while Romberger is often more focused and clear-toned than Connolly, who has a pleasing richness to her lower register. Channel Classics recording for Fischer is warmer, with more space around the orchestra, and the voices relatively up front, while Pentatones Berlin recording (made in the Philharmonie) is drier, more detailed, and achieves a greater synthesis of vocal-orchestral balance. This last factor proves to be key, for Mahlers fusion of genres surely demands something more than the conventional spotlighting of vocal soloists. Under Jurowski, the orchestral soloists (and they are many, in this most intimately scored of works) are every bit as crucial as the sung voices, and the individual talents of his musicians, especially in the evocative woodwind solos, play a big part in the performances success.

It is Jurowski, too, who brings out the immediacy of much of the score, from the double-edged revelry of the drunken man in the first and third movements, to the heartfelt reflections of the alto in the second and sixth. Both performances have a palpably cumulative trajectory, with the final half-hour Abschied movement crowning performances of enormous power and emotional involvement. But while Romberger and Fischer are undeniably beautiful and affecting, its is Connolly, Jurowski and his Berlin players who penetrate the words and music more deeply, as well as being more alive to such details as the intended pitches for the altos Ich werde niemals in the movements final section. The focus of the Berlin recording brings the potency of this music, above all in the great funeral march before the final vocal section, more sharply into focus, without losing any of the spiritual radiance that brings such consolation and joy in earthly creation.

If its vocal beauty and warmth of sound youre looking for, you may well prefer Fischers account, but for sheer involvement, expressive maturity, and an unfailing command of the works epic sweep, Jurowski is the one to go for. (Sadly, Pentatone have unaccountably omitted the text of the last movements closing section: a grievous error if you have no other source to hand, but in the wider context a relatively minor one.) Committed Mahler collectors will no doubt want both recordings: they certainly each deserve a prime place in the current catalogue, and for immersiveness of sound (both are in surround sound on Hybrid SACDs) they will challenge even some of the classics.

Also soon to be released is a moving recording of Reinbert de Leeuws chamber version of Das Lied, with mezzo Lucille Richardot, tenor Yves Saelens and the musicians of Het Collectief on Alpha Classics. De Leeuws arrangement is for slightly larger forces than Arnold Schoenbergs 1918 version for the Society for Private Musical Performances, adding a harp and contrabassoon (both indispensable elements of the musics soundworld). It was recorded just two months before de Leeuws death in February 2020, and for his many admirers it will be an essential acquisition, bringing a notable lightness and airiness to the score. Its a unique and fitting epitaph, and its chamber scale, so apt for Das Lied von der Erdes intimate score, is also peculiarly appropriate for our present times.

... the perfect case for pulling the lustrous stops out at each death-transcending release in the 'Farewell', Mahler may mark the dynamics at a lower level, but the emotion is irresistible. Above all it's her perfect fusion with the many vocal woodwind solos  every trill and turn strikingly vivid  that places Jurowski's 'Song of the Earth' amongst the greatest.
BBC Music Magazine

This is a performance of such distinction that regardless of ones personal view of the piece  that is, exactly how objective or subjective you want or need your Mahler to be, and whether you favour an alto or baritone voice  it must be considered a prime contender for anyones library.  (Recording of the Month)
Gramophone September 2020

The accompanying booklet includes an essay on the great song symphony by Jurowski himself, which is full of insights.  Jurowski shapes the instrumental commentary with meticulous accuracy, while the intrusions of the everyday world in the joyous outbursts of the earlier movements take on a deliberately abrasive quality.  Andrew Clements
The Guardian 13 August 2020