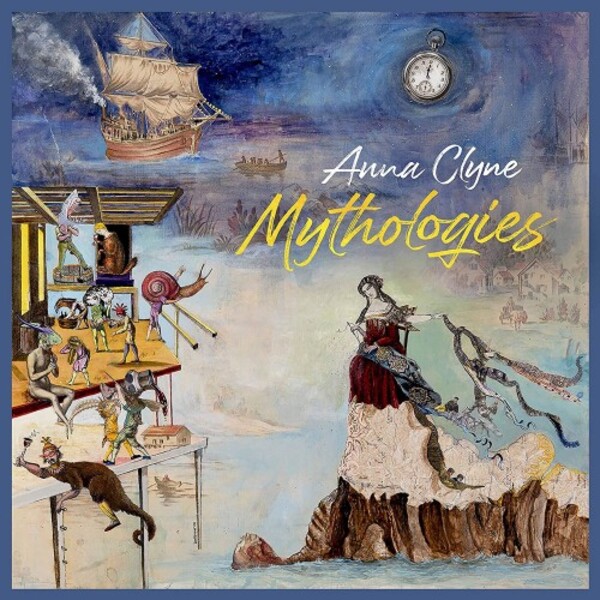 Anna Clynnes enormous palette of colours and special effects coalesce into an aural three-dimensional experience of striking originality. Equally theres a comforting familiarity to her music, as she draws inspiration from historic styles that she transforms into a new musical dialect. Annas background in electro-acoustic music and her fascination for a variety of multimedia - including poetry, visual art and videography - combine to create rich and exhilarating textures of popular appeal.

The five works on Anna Clyne - Mythologies were written over a 10-year period between 2005 and 2015. The performances on the album feature the BBC Symphony Orchestra and four internationally-acclaimed conductors. Masquerade, commissioned by BBC Radio 3 to open the Last Night of the Proms 2013 and conducted by Marin Alsop, captures the spirit of that quintessentially English tradition. The title evokes an 18th-century outdoor festivity featuring fireworks, acrobats and street entertainers.

The album concludes with <<rewind<<, conducted by André de Ridder. Its a wild romp imagining the backwards scroll of a video tape complete with glitches, skips and freezes.

Im struggling to remember the last time a piece of contemporary music made me cry ... in the final movement of Anna Clynes DANCE, a cello concerto in all but name, a bear-hug of a theme emerges through angry, percussive col legno snaps that is so beautiful, so heartfelt that it instantly drew tears on first hearing. Repeated listening had a similar effect. - Gramophone Editors Choice (on Anna Clynes DANCE for cello and orchestra, AV2419)

British composer Anna Clyne has written perhaps her most ambitious and appealing work so far. Its hard to resist the gorgeous opening of DANCE, her new cello concerto ... Clynes orchestrations are keenly attentive to color and light, and shes fearless in filling the concerto with melodies of undisguised beauty. Some are folkish, others are regal. All linger in the ear, begging to be heard again. - National Public Radio, 25 Favorite Songs of 2020 (on Anna Clynes DANCE for cello and orchestra, AV2419)