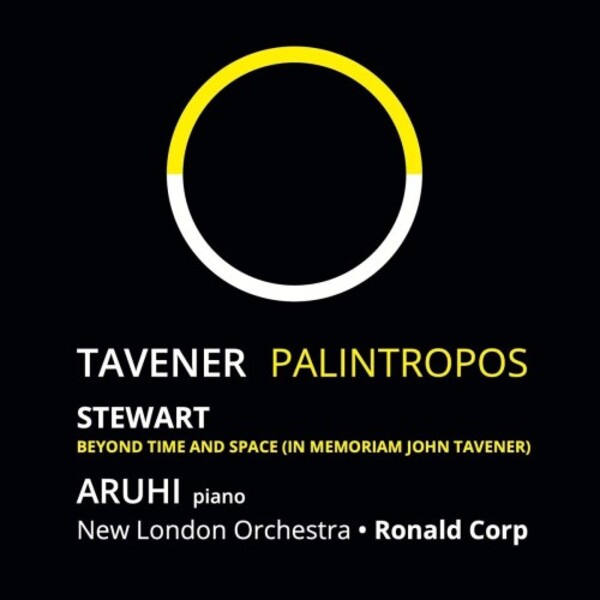 Beyond Time and Space (In memoriam John Tavener)

Palintropos for piano and orchestra

Beyond Time and Space (In memoriam John Tavener)

Palintropos for piano and orchestra

The world premiere recording of John Taveners Palintropos for piano and orchestra, performed by the Japanese pianist ARUHI with the New London Orchestra and conducted by Ronald Corp. The work is coupled with Michael Stewarts Beyond Time and Space (In Memoriam John Tavener).

... the only piece of mine that ever came near to being a Debussyan tone poem.  John Tavener on Palintropos for piano and orchestra

With the exception of The Whale and Celtic Requiem, the earlier music of John Tavener has been somewhat eclipsed by the mid to late works such as The Protecting Veil, The Ikon of Light and The Veil of the Temple. Here is an opportunity to discover discover one of Taveners early masterpieces. Dating from 1978 its composition was flanked by his chamber opera A Gentle Spirit (1977) and Akhmatova Requiem (1978).

Palintropos is one of Taveners most dynamic works in his output and alternates between columns of sound of exhilarating, ferocious pianism and lyrical, arabesque-like passages of sheer beauty. In this world premiere recording of John Taveners Palintropos the pianist is the brilliantly talented Japanese pianist ARUHI (making her debut commercial recording) and she is accompanied by the New London Orchestra conducted by Ronald Corp.

Also on the album is Michael Stewarts Beyond Time and Space (In Memoriam John Tavener). A three-movement work composed for ARUHI exploring the nature of consciousness and the idea of consciousness as information that exists beyond time and space that ultimately permeates the entire universe.

Aruhi is a classically-trained pianist and composer who has given recitals in Japan and Europe, both as soloist and accompanist, working with, among others, the oboist Katsuya Watanabe, the violinists Ami Ito and Michiko Kobayashi.

In 2015 she spent six months in London studying with Professor Christopher Elton of the Royal Academy of Music and in 2017 she played a programme of music by the 20th-century Cuban composer Ernesto Lecuona in the 12th-century underground church of St Jean in Aubeterre-sur-Dronne, France. She has composed an album of experimental electronic music, which was published on the website of the Electronic Music Library. Her boundless musical curiosity extends, however, to all aspects of her craft and she has played in multiple genres, from the opera of Shuji Terayamas Asian Clack Band Troupe to piano and synths for Tokyos extraordinary Robot Restaurant show, from playing with the Franco-Cuban band El Son del Cauto to performing with the all-girl rock band Draw Never. She has sat in with Hugo Mottas Salsa Illegal and regularly plays keyboards for Bozu Band, a rock ensemble comprised of Buddhist monks. She has composed and played the score for a documentary series The Story of Noh.

In August 2020 she won the Jury Prize at the 6th Tachikawa Film Festival for a short film, Lukewarm Heart, for both direction and film score and has recently been commissioned to compose the soundtrack for another film project.

Michael Stewart is a composer, pianist and writer. He studied composition at Trinity College of Music, London with John Tavener and at the International Film School, London with Richard Arnell. His music covers a diverse range of styles and genres and he has frequently worked in collaboration with film, dance, theatre and other mixed media projects. His music is often inspired by his interest in cosmology, time, memory, Zen philosophy, sacred geometry and quantum theory.

As a writer Stewart has written for many leading music publications including The Guardian, Gramophone magazine, The Good CD Guide, Music & Musicians, the BBC as well as writing CD liner notes for major classical labels. He founded the record label A Flock Ascending in 2017 to promote emerging talent in the field of performance and contemporary music.