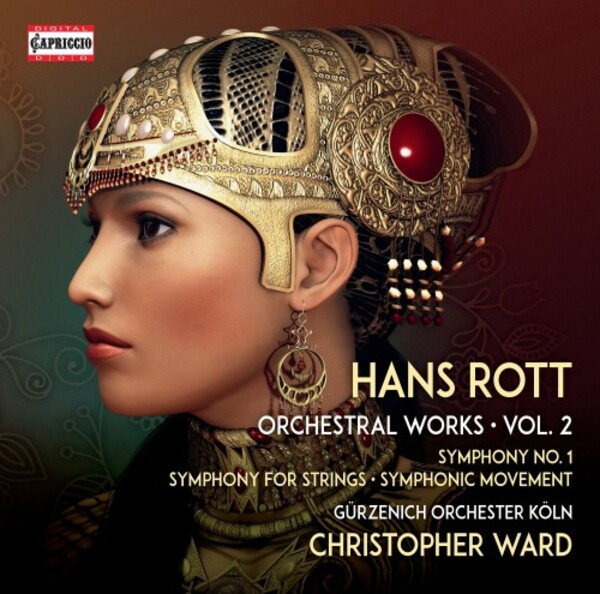 The 1989 premiere of Hans Rotts Symphony no.1 in E major (it was written more than 100 years earlier) introduced the international music world to a composer who had remained unknown, or known by name only, even among experts. His colleagues and friends included the younger composers Gustav Mahler and Hugo Wolf. Besides Wagner, Bruckner was the most important model for Rotts first symphonic work. Written when he was barely twenty years old, the work stands as his magnum opus, his only completed major work, a synthesis of what he had written to date, and a proclamation of what might have been yet to come.

Yes, he is so related to my very self that he and I are like two fruits from the same tree, produced by the same soil and fed by the same air.  Gustav Mahler

Its now a little over thirty years since the discovery of his Symphony in E major revealed Hans Rott (1858-1884) to be a crucial link between Anton Bruckner and Gustav Mahler in the genesis of the New Symphony of the turn of the twentieth century. A patent influence on Mahlers own developing style (he and Rott had been students together before Rott succumbed to the mental breakdown that would lead to his early death), the Symphony has in recent years received several impressive recordings, showing the power, originality and promise of a composer who, had he overcome his early career setbacks, would surely have become a major figure in the symphonic repertoire. As it is, barely eight of Rotts orchestral works survive, mostly juvenilia (for a composer who died before his twenty-sixth birthday, how could they be otherwise?). Six of them  four preludes and two suites  were recorded by the Gürzenich Orchestra of Cologne under Christopher Ward on their first volume of Rotts orchestral works for the Capriccio label. Now, just a few months later, comes the concluding instalment, including not just the E major Symphony that forms Rotts opus summum, but also his earliest orchestral work, the Symphony in A flat for string orchestra of 1874-75.

These two works, together with the first version of the E major Symphony's opening movement, eloquently demonstrate the musical distance travelled by Rott between the Symphony for strings (written during his mid-teens) and the E major work of his early twenties. The String Symphony bears obvious debts to Mendelssohn and Schubert, and it brings to mind the world of the string serenades of Dvořák (1875) and Tchaikovsky (1880). Its three-movement layout, with a second movement marked Grave e largo and a third headed Scherzo suggest that the work would have been completed by a fourth movement that is either missing or was never completed. As it is, this three-movement torso brims with graceful invention and a confident command of the string idiom. The first movement combines youthful confidence with real elegance, while the slow movement includes tell-tale major-minor inflections and a steady pacing that betray Rotts closeness to Bruckner, his organ teacher at the Vienna Conservatory. In the Scherzo a Mendelssohnian lightness alternates deftly with the earthy tread of a rustic dance, as well as incorporating moments of counterpoint that became one of Rotts early trademarks. This, only the works second recording, is a welcome addition to the catalogue, played by the Gürzenich strings under Wards nicely-paced direction with great finesse and spirit.

Only a few years separate the String Symphony from its E major sister work for full orchestra, yet they are worlds apart in emotional scope. Rott composed the first movement for a student competition at which his was the only entry not to win a prize, yet somehow he found the resolve to complete the work, with each movement longer than the previous one. The opening Alla breve is clearly influenced by Wagner and Bruckner (not least the first theme, announced by the solo trumpet). Though much of the time unashamedly grandiose, it has all the hallmarks of expressive sincerity, anticipating the redemptive tone of Wagners Parsifal (1882) at its best. This opening serves as a proto-thematic quarry for much of what follows: a solemn but heartfelt Adagio featuring a notable brass chorale theme and anguished chromatic climaxes which eventually found a more durable home in Mahlers Third Symphony, and a rousingly bucolic, episodic scherzo whose roots lie in Schumann and whose direct influence can be felt in several of Mahlers greatest symphonies, from the First through to the Seventh. Later he would write of Rott that [h]is innermost nature is so much akin to mine that he and I are like two fruits from the same tree, produced by the same soil, nourished by the same air. You can sense as much, not just in the inner movements but in the ambitiously scaled finale, at over twenty minutes by far the longest of the four movements, with its many premonitions of the mature Mahler, as well as a passing nod Brahmss First Symphony and an ending of Wagnerian repose rooted in the closing pages of Die Walküre and Götterdämmerung.

Although there are undeniably moments that would have benefitted from subsequent revision (some of the climaxes are congested, and theres a curious over-reliance on the triangle to add its tinkling sound whenever an opportunity arises), Rotts Symphony is unquestionably a work of major importance in the development of the late-Romantic genre, even if its immediate impact was limited almost exclusively to Mahler, who had studied a score that lay unperformed until 1989. Retrospectively he hailed Rott as the founder of the New Symphony as I understand it, and Christopher Ward secures from the Gürzenich Orchestra playing of polish, commitment and tonal bloom that does the Symphony handsome justice. Its a reminder that this is an orchestra with a distinguished pedigree under such eminent conductors as Steinbach, Abendroth and Wand, and with world-premieres of Brahms, Mahler and Richard Strauss to its credit. Wards pacing is well-nigh perfect, bringing plenty of momentum where needed (as in the third movement) but also allowing the many climaxes just enough room to breathe without tipping over into grandiloquence. Top marks, too, for the solo trumpet and horn, as well as for some richly characterful woodwind playing. The early version of the first movement differs little from that of the completed work, but whether or not youre already familiar with the E major Symphony, this album  together with Volume 1 of the set  is surely a must-have for any lovers of the late-Romantic and early twentieth-century symphony.