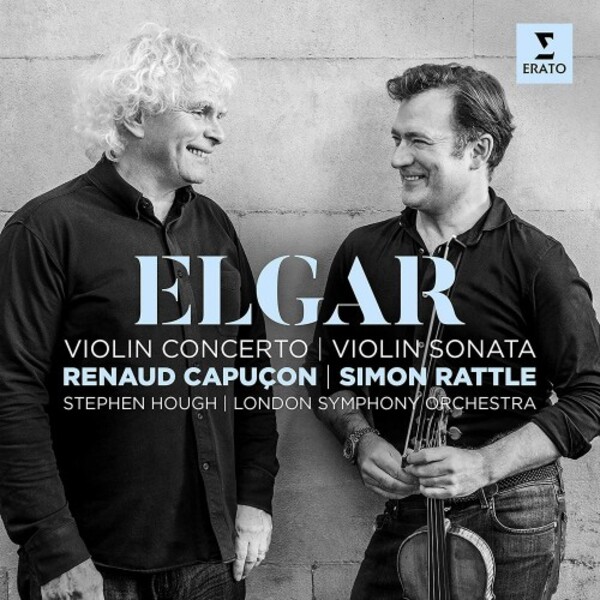 Elgars violin concerto  distinctively passionate and nostalgic  is one of the great late-Romantic concertos, but it is comparatively rarely played. As both Renaud Capuçon and Sir Simon Rattle point out, it is not a piece that has been favoured by French violinists. Perhaps, despite the worldwide currency of the composers cello concerto and Enigma Variations, this arises from some lingering perception of the composers music as exclusively and mysteriously English.

At the concertos premiere in 1910, the London Symphony Orchestra  which Rattle, as Music Director, conducts for this recording  was joined not by a British soloist, but by Fritz Kreisler, born in Vienna and one of the pre-eminent violinists of his day, indeed of the entire 20th century. He commissioned the work, being of the view that: If you want to know whom I consider to be the greatest living composer, I say without hesitation Elgar  I place him on an equal footing with my idols, Beethoven and Brahms ... His invention, his orchestration, his harmony, his grandeur, it is wonderful. And it is all pure, unaffected music.

In 2008, Kreisler was among the great violinists of the past whom Renaud Capuçon honoured with his album Capriccio. The Elgar concerto is a huge piece, he says, both in terms of its length [some 50 minutes] and its romantic and noble nature. Capuçon has known Sir Simon Rattle for some 20 years, but this is their first recording together. He is a gentleman in music, continues Capuçon, he doesnt put pressure on the soloist. I had the feeling I could surf on the LSOs sound. Its players love the music and they are there straight away  disciplined, but adapting around you as a soloist.

Elgar, who was himself a violinist, had a close relationship with the London Symphony Orchestra. In 1905, when the LSO was just a year old, he conducted it on its first provincial tour and it gave the premiere of his Introduction and Allegro. In 1911 he became the orchestras Principal Conductor, going on to hold the post for two years. The LSO subsequently premiered his symphonic study Falstaff (1913) and his cello concerto (1919), and in 1932 Elgar conducted the LSO for the legendary Abbey Road recording of the violin concerto with Yehudi Menuhin as soloist.

Sir Simon Rattle chose music by Elgar, the Enigma Variations, for his inaugural concert as Music Director of the LSO in 2017. He describes the violin concerto as a masterpiece and also a monster piece, pointing out that it is probably the longest concerto written before the 1960s. It is conceived on a broad canvas, but it is also very personal and intimate.

The most celebrated passage of the concerto comes in the final movement with an extended and complex cadenza. Not only is such a cadenza more usually allocated to the first movement of a concerto, Elgar also chose to give it an accompaniment: a shimmering background of what he called thrumming on the orchestral strings  a kind of  pizzicato tremolo. Among the material explored in the cadenza is a phrase Elgar called the Windflower theme in letters he wrote to a family friend, Alice Stuart-Wortley. Although he was happily married  his wife was also called Alice  he had an intense affection for Mrs Stuart-Wortley, whom he gave the sobriquet Windflower. It is also highly possible that he had her in mind with the enigmatic Spanish epigraph he placed on the score of the concerto.

Renaud Capuçon senses the idea of a secret love in the slow movement of Elgars Violin Sonata, first performed in 1919. Pairing it with the concerto on this album, he is joined by one of the leading British pianists of today, Stephen Hough; the duo first collaborated in early 2020 at Londons Wigmore Hall. The sonata is a work of nobility and tenderness, says Capuçon. The long phrases in the slow movement make me think of someone who is in love, but afraid to say it. Hough feels that this expressive landscape is very English in its combination of reserve, frustration and passion. Elgars music is not obvious  it can go off in strange directions. Like the violin concerto, the sonata is dangerous music, in that it can get so close to sentimentality, but it never tips over the edge.

Capuçon, Rattle and the LSO came together for this recording at LSO St Lukes, a former church, designed in the 18th century by Nicholas Hawksmoor, architect of several famous churches in and around the City of London. St Lukes, both a concert and recording venue, is near the LSOs principal home, the Barbican Centre. For their recording of the violin sonata, Capuçon and Hough headed to north-west London and the church of St Jude-on-the-Hill in Hampstead Garden Suburb. Not only was the church designed by Elgars great contemporary Sir Edwin Lutyens  in some respects the composers architect analogue as a representative of his era  its consecration took place just a year after the premiere of the violin concerto. It also happens that, from 1911-1921, Elgars London home was in neighbouring Hampstead.

... the orchestral opening of Renaud Capuçons account, as moulded by Simon Rattle, takes the concerto firmly back into the 19th century, and when the soloist eventually enters, the generous space he allows himself for his initial phrases suggests that he shares that view of the work, too. ... Capuçons partnership with Stephen Hough is very much a true meeting of equals, with both contributing ideas to the interpretation; its a wonderfully flexible performance, with just the right sense of veiled nostalgia about it.  Andrew Clements
The Guardian 25 February 2021