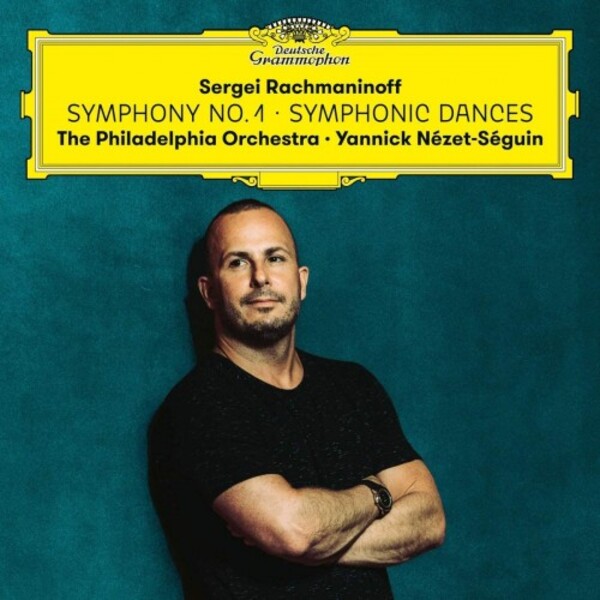 The recordings of Sergei Rachmaninovs complete Piano Concertos with Daniil Trifonov on Deutsche Grammophon are widely acclaimed, and now the Philadelphia Orchestra and their Music Director Yannick Nézet-Séguin are embarking on another project of Rachmaninovs works, presenting his three symphonies and other orchestral works.

This first album entails the composers Symphony no.1 with the Symphonic Dances, thereby combining one of his earliest compositions with his very last one. Yannick Nézet Séguin was keen to match these two works, thus not only presenting a time span of more than 40 years of the composers life, but also him partly using the same musical material.

When Rachmaninovs First Symphony was premiered in 1897 by a badly prepared orchestra: the performance turned out to be a disaster which obviously deeply hurt the young composer, not even 24 years old. Yet, later decades proved this early work to be absolutely worth a listen when performed by a first-class orchestra and conductor.

And who could be a better choice for this than Yannick Nézet-Séguin and his Philadelphia Orchestra? The second work on this album, the Symphonic Dances, op.45, was written in 1940 and has been dedicated to the Philadelphia Orchestra and to Eugene Ormandy, its music director back then, by Rachmaninov. And in contrast to his First Symphony the Symphonic Dances were successful from the very beginning!

This album is the first of three Rachmaninov releases with the Philadelphia Orchestra and Yannick Nézet-Séguin , followed by recordings of Symphony no.2 and The Isle of the Dead in 2022 and, commemorating the 150th anniversary of Rachmaninovs birthday in 2023, Symphony no.3 and The Bells.

Yannick Nézet-Séguins Rachmaninov symphony cycle with the Philadelphia Orchestra on Deutsche Grammophon gets off to a cracking start with its first release. It pairs the First Symphony  the work whose disastrous 1897 premiere under an apparently drunken Glazunov caused a prolonged period of depression for the composer that was eventually remedied only by hypnotherapy  with what many consider to be Rachmaninovs masterpiece, the Symphonic Dances. The Philadelphia Orchestra had a particularly close association with Rachmaninov in his American years, premiering not just the Symphonic Dances (under Ormandy) but also the Paganini Rhapsody and the Third Symphony (under Stokowski, with the composer himself at the piano in the Rhapsody). But the pairing on this new disc makes a lot of sense: not just the coupling of Rachmaninov's earliest numbered symphony with his final symphonic composition, but also their motivic links (the motto theme of the Symphony is a nod to the Dies irae chant quoted extensively in the Symphonic Dances and so many of the large-scale works in between, while the first of the Dances goes still further in quoting the First Symphonys motto theme).

After its fateful premiere the First Symphony was withdrawn by Rachmaninov and widely presumed lost; it resurfaced in Russia in 1944, the year after the composers death, receiving its second premiere in Moscow on 17 October 1945, and its American premiere in March 1948 by Ormandy and the Philadelphians. This rediscovery prompted a major reevaluation of the works stature, and on this latest disc the present-day successors in the Philadelphia Orchestra do it proud under the inspired, sure-footed guidance of their current music director. Right from the off this is a performance that grips the listeners attention, with sumptuous sound and great depth of tone but also an extraordinary textural transparency that reveals a myriad of details. The Symphonys Achilles heel is reckoned to be its episodic nature, but Nézet-Séguin's skillful pacing and long-term thinking are such that neither this nor the young composers penchant for moments of fugal writing barely register against the emotionally compelling trajectory of each movement. Rachmaninovs debts to not just Tchaikovsky but also Rimsky-Korsakov and Mussorgsky are evident in the abundance of colour (with some fabulous woodwind solos, and sparkling percussion), but these influences are similarly well-integrated into the whole.

Theres the necessary heft in the ominous central section of the second movement, and the beautifully-poised Larghetto third movement is delicately tinged with regrets, betraying the works emotional origins in the pains of a youthful love affair, deeply felt yet without wallowing. The finale, with its jubilant, echt-Russian opening fanfares, is thrillingly played, with its mixture of extrovert good-humour and underlying tensions expertly balanced, capping a performance that must rank with the very finest. If any recording can convince you of the boldness of Rachmaninovs youthful vision, its this one, splendidly captured from live performances in June 2019.

The Symphonic Dances, similarly taken from live performances in September 2018, are just as classy. Under Nézet-Séguin, the orchestra has unquestionably rediscovered its Rachmaninov roots, in a performance that combines tonal beauty, rhythmic buoyancy (these are, after all, dances) and a distinctiveness of character that allows it to penetrate the depths of the composers expressive language. The woodwind playing in the first dance is especially fine, notably the flute (gorgeously limpid!), cor anglais and all-important saxophone: the central episode (first wind alone, then radiant strings plus harp) is absolutely magical.

The balance between darkness and light in the waltz-like second movement is well-nigh perfect here, a shadowy world with hints of the macabre dance movements of Mahler and Suk, but with an extra, quintessentially Rachmaninovian generosity of feeling that owes nothing to either. The muted trumpets are particularly telling, and the written-in rhythmic hesitations are placed with masterly judgement. As for the demonic finale, here the orchestra really play their socks off, reeling off the detailed figuration with virtuosic aplomb, and investing the middle section with an aching bleakness that sets off the surrounding brilliance all the more effectively. The closing pages are just sensational, a triumphant headlong dash (Rachmaninov wrote Alliluya in the score, with life finally victorious over death), with the final tam-tam stroke left ringing to point up another link between Rachmaninovs final major utterance and the First Symphony.

Altogether, then, a superb launch to a cycle that, if it lives up to these standards, should prove a new benchmark. And, at a time when most live orchestral performances are still suspended, and even new symphonic recordings may be getting rarer, this is sure to win over the hearts of many listeners.

There can be no underestimating the extraordinary legacy surrounding Rachmaninov and Philadelphia. That he composed the Third Symphony and Symphonic Dances with the citys great orchestra in mind is testament to how their sound intoxicated him. The string sound in particular played into not just the precision and opulence of his writing but more importantly its obsessiveness and inherent darkness. ... Yannick Nézet-Séguins account of the troubled First Symphony is as surprising and as thrilling as any I have heard ... an altogether stunning album.  Edward Seckerson (Recording of the Month)
Gramophone February 2021