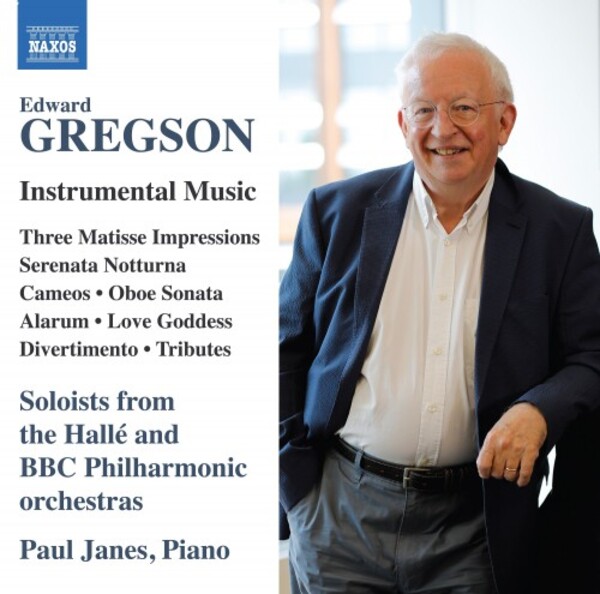 Edward Gregsons career has followed two parallel paths, one to the top tier of music education and the other towards the international reputation he now enjoys as a composer. This representative selection is Gregsons own and spans more than half a century, from the youthful exuberance of his Oboe Sonata to specially prepared versions of two of his most evocative compositions, Three Matisse Impressions and Love Goddess. The selected soloists are drawn from two leading symphony orchestras with which Gregson enjoys special relationships.

Edward Gregson turned 75 years old in 2020 and this is a good vantage point to survey some of his instrumental music played by friends and professional colleagues. A collection of his solo piano music was released in August 2020 (8574222), which included his own performance of A Song for Sue, in which the main theme was taken from his early Concertante written as an engagement present for his wife-to-be, Sue.

The Three Matisse Impressions is heard in the version for flute which has never been recorded before. Amy Yule is an enthusiastic chamber musician, and became principal flute of the Hallé in 2019, having previously held the same position with the Royal Northern Sinfonia.

Manchester-based pianist Paul Janes has had a busy performing career since graduating in 1991 from the Royal Northern College of Music, where he was the recipient of several prestigious awards and scholarships. He has worked regularly for many years as orchestral keyboard player for both the BBC Philharmonic and the Hallé, as well as freelancing with other orchestras around the country.