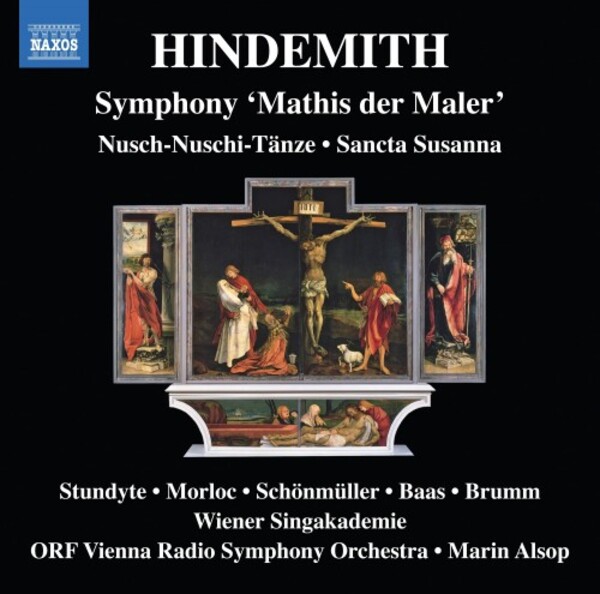 Paul Hindemiths life was dominated by the events of the two world wars. In 1917, his discovery of contemporary Expressionist poetry and drama transformed him from a talented student to Germanys leading new composer. His one-act operas Sancta Susanna and Das Nusch-Nuschi date from this period. Sancta Susanna  Hindemiths first masterpiece  combines religious and erotic symbolism into an eerie narrative that was shocking for its time, whereas the dance suite from Das Nusch-Nuschi emphasises the plots origin as a Burmese comedy. The three symphonic movements from the opera Mathis der Maler refer to the three panels of the Isenheim Altarpiece by Renaissance painter Matthias Grünewald, but also graphically reflect Hindemiths own artistic struggles in Nazi Germany.

This new release follows the audiovisual release of the full opera Mathis der Maler recorded from Theater an der Wien (DVD  2110691-92 / BD  NBD0130V), and praised by The Guardian: Warners production [is] full of telling detail Its superbly conducted by Bertrand de Billy, making the most of the operas visionary moments.

Marin Alsop is chief conductor of the ORF Vienna Radio Symphony Orchestra, which she leads at Viennas Konzerthaus and Musikverein, and on recordings, broadcasts and tours. She is also chief conductor of Chicagos Ravinia Festival where she conducts the Chicago Symphonys summer residencies. In 2020 she was appointed music director of the National Orchestral Institute + Festival at the University of Marylands Clarice Smith Performing Arts Center. The first and only conductor to receive a MacArthur Fellowship, Alsop received the World Economic Forums Crystal Award and was the first woman to conduct the BBCs Last Night of the Proms. In 2002 she founded the Taki Alsop Conducting Fellowship.

Alsops complete Bernstein recordings on Naxos were released as a special 8-disc set (8508018) in 2018 and met with critical acclaim. Gramophone commented: Alsop, whether shes in Bournemouth, Baltimore or São Paulo, always theres that sense of enthusiastic authority, never overbearing which works in the musics favour.