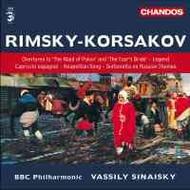 This new disc from the BBC Philharmonic offers the ever-popular Capriccio Espagnol along with the rarely heard Overtures to The Maid of Pskov and The Tsars Bride, both displaying the composers penchant for vividly colouristic orchestration, and other works that are unaccountably given few outings in the concert hall and on disc.
One of the Five, or Mighty Handful, Rimsky-Korsakov was the only one really to master the orchestra: indeed he contributed as much to the craft of orchestration in Russia as Berlioz did in France and Wagner in Germany. Nationalist works by Glinka deeply impressed him and he met and was influenced also by Balakirev. Regarding opera as essentially the most enchanting and intoxicating of lies, he drew on his countrys rich folk heritage to create a fairy-tale world in which the fanciful and commonplace were fused through extravagant orchestral and fervently romantic vocal writing. His devotion to Russian folk-music was to result in a classic collection of folksongs, and these appear in a number of his compositions.
The Sinfonietta on Russian Themes began life in 1878-79 as a string quartet, but was rewritten for orchestra with strong Russian themes and inflections. For Capriccio espagnol, Rimsky-Korsakov turned to the sights and sounds of Spain. He wrote, the Spanish themes, of dance character, furnished me with rich material for employing colourful orchestral effects. At the first performance it was encored, and it remains one of his most popular orchestral pieces. Neapolitan Song also rejoices in the Mediterranean world, in this case making use of Luigi Denzas popular song Funiculì, funiculà and recorded here in the orchestral version  a version currently not otherwise available on disc.
The BBC Philharmonic exploits Rimsky-Korsakovs colourful orchestrations in fantastic performances that highlight the music role as the epitome of the brilliance and pageantry of Tsarist Russia.
A unique selection of sumptuously orchestrated works, some of them rarely recorded - alongside well-known repertoire is the only available recording of the Neapolitan Song in its orchestral version. Magnificently performed by the BBC Philharmonic under Vassily Sinaisky.