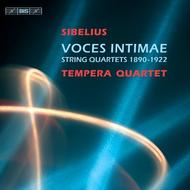 Jean Sibeliuss relationship to the string quartet genre is something of an enigma. The two previous discs in this trilogy of his complete works for quartet contain substantial programmes of the music written between 1885 and 1889, and more than half of the present disc is taken up by two works written in 1890.
But then there is a gap of almost twenty years before Sibelius wrote his by far most famous work in the genre, the Quartet in D minor Voces intimae, and in spite of its favourable reception, he didnt compose another work for string quartet apart from the brief Andante festivo, in 1922. The reason for his first long silence may be his successes as a symphonist which diverted him from the field of chamber music even despite his later triumph with Voces intimae.
Whatever the reason may be, with the present disc the Tempera Quartet provide us with the final pieces of the puzzle of Sibelius and the string quartet  including a preliminary ending of Voces Intimae which has never been recorded before!
The previous two discs have met with overwhelming praise in the international music press, both for the performances and for the interest of the repertoire: an endless fount of ideas, reactions, attempts, trials, in which one discovers vigour, spontaneity, inventiveness, conviction (Scherzo), a treasure-trove  full of unexpected surprises (International Record Review) and this wonderful repertoire  of great beauty and a surprisingly classical balance (Classica-Répertoire).