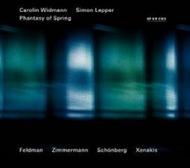 The young German violinist, Carolin Widmann, resident in Britain, follows up her romantic Schumann debut on ECM with Phantasy of Spring, a very different recording of four uncompromising 20th century pieces  performances of which she has a deserved international reputation.

While she made her critically-acclaimed ECM debut in autumn 2008 with a thought-provoking account of Schumanns three violin sonatas, Carolin Widmanns reputation as a pioneering interpreter of contemporary music is spreading continuously. Teaming up with English pianist Simon Lepper she now presents a most varied spectrum of 20th century violin literature. By exploring the acoustic and expressive conflicts between the stringed instrument and the well-tempered keyboard, all four pieces are preoccupied with duo constellations beyond the traditional role models. Uncompromising and fiery renderings make for adventurous listening throughout.

Carolin Widmann (sister of German composer Jorg Widmann) gave the world premieres of no fewer than five violin concertos in 2008. She also made her BBC Proms debut in 2008, performing the Stravinsky Violin Concerto with the BBC Symphony Orchestra under George Benjamin.

Simon Lepper is especially known for his work accompanying singers, among them Bryn Terfel, Angelika Kirchschlager, Mark Padmore, Felicity Palmer, Kate Royal and Joan Rodgers. He is an official accompanist for the BBC Cardiff Singer of the World Rosenblatt Song Prize and the Yehudi Menuhin Violin Competition.