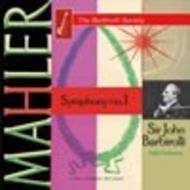 Symphony no.1 in D major 'Titan'

Symphony no.1 in D major 'Titan'

During the last sixteen years of his life, Sir John Barbirolli devoted himself to the music of Gustav Mahler almost as assiduously as he did to that of Elgar. He conducted the symphonies, except the Eighth and the Cooke performing version of the Tenth, not only in Britain but in America, Germany, Austria, Russia, Italy and elsewhere. He recorded only four commercially, but fortunately his performances of Nos 2, 3, 4 and 7 have survived and have been issued on CD.

The story is well known of the bad blood which existed between him and Sir Thomas Beecham after Beechams disgraceful written attempts to undermine him in New York in 1936. As a result, JB refused to sanction an invitation to Beecham to guest conduct the Hallé after 1943. But in 1955 he relented enough to allow Beecham to bring his own Royal Philharmonic Orchestra to Manchester to give two concerts in the Hallé series. It was a memorable programme ending with Tchaikovskys Manfred Symphony. The critics wrote glowing notices. So when a fortnight later the Hallé played in the hall, the atmosphere of gladiatorial contest was unavoidable.

This was meat and drink to JB and the performance of the Mahler symphony was geared to eclipse memories of Beecham! The audience were the winners: they heard two magnificent performances by two great orchestras under two great conductors. Who cared which was the better, if indeed such a judgement could reasonably have been made?