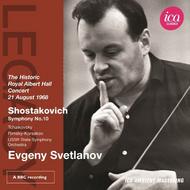 The Legend of the Invisible City of Kitezh: Suite

» Hymn to Nature
» Massacre at Kerzhentz

The Legend of the Invisible City of Kitezh: Suite

» Hymn to Nature
» Massacre at Kerzhentz

These performances have never been issued before on CD.

The performance of Shostakovichs Symphony No.10 was given on the very night that Soviet tanks invaded Czechoslovakia in a concentrated effort to halt The Prague Spring, the liberal political reforms initiated by Alexander Dubcek. The atmosphere in the Royal Albert Hall, as can be heard from the shouts of protest, was electric and very tense. It is likely that the USSR State Symphony Orchestra had not heard the news, but after the first few bars, the disruption was finally drowned out by other members of the audience and from various accounts, Svetlanov, as can be heard here, then went on to give the performance of his life. Svetlanovs widow, on hearing the test pressings of this CD, said that the performance brought tears to her eyes and the emotion of that evening came across very strongly.

Two short bonus titles have been added  Tchaikovskys Melodrama from The Snow Maiden and two excerpts from Rimsky-Korsakov's Invisible City of Kitezh.