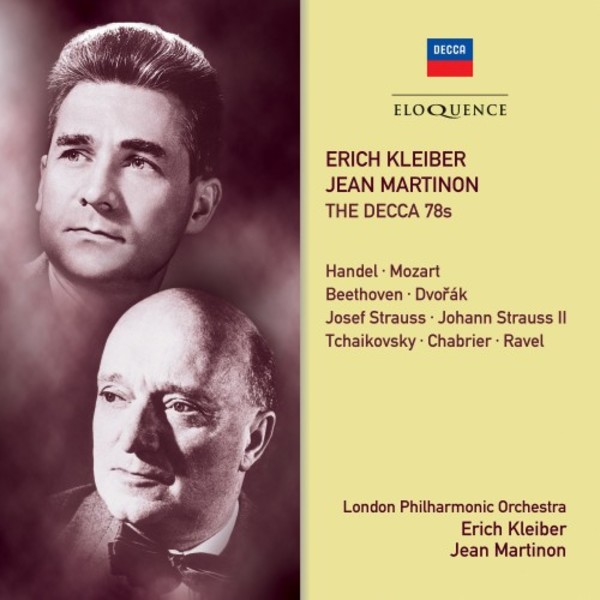 The Maid of Orleans

The Maid of Orleans

Decca studio recordings made between 1947 and 1949 with the London Philharmonic Orchestra, newly compiled and remastered by Mark Obert-Thorn and including material new to CD. Decca first presented its ffrr technology  full frequency range recording  in 1944, originally developed by the companys engineers as a means of detecting and identifying German submarines through their engine noises.

Following the success of Stravinskys Petrushka with Ernest Ansermet (made in 1946 and reissued by Eloquence in its comprehensive series dedicated to the Swiss conductor) other major artists visiting London were invited to make records at the acoustically excellent Kingsway Hall. One of them was Erich Kleiber, who had attracted a considerable following in London through his concerts. Audiences did not merely listen and applaud, remembered his friend, the scholar Jacques Barzun. They knew what they were doing.
Kleibers repertoire for Decca mirrored his concerts: symphonies by Mozart and Beethoven, overtures by Dvořák and Handel, and Strauss-family favourites, all done with superb attention to rhythmic lift and dynamic balance so that, combined with Deccas pioneering technology, listeners could (and still can) hear inside the scores to a degree still remarkable for the late 1940s. The old ideal of classical objectivity was Kleibers inspiration for Beethovens Pastoral Symphony: he was a conductors conductor, observed The Spectators reviewer, seeing Kleiber in concert at the time of these recordings, who obtained precisely what he wanted with instinctive ease and economy of means.
The French conductor Jean Martinon also had a short-lived relationship with Decca in London before making most of his records in the US for RCA. They include deliciously light-textured accounts of Ravels Le Tombeau de Couperin and Chabriers Suite Pastorale as well as another gramophone rarity: the farewell aria for Joan of Arc in Tchaikovskys opera The Maid of Orleans, sung by the Polish mezzo-soprano Eugenia Zareska.

[Martinon is] a conductor of rare sensibility judging by his reading of this subtle score. The playing of the London Philharmonic is absolutely first rate ... The clarity and balance of the recording is undoubtedly one of Deccas best efforts.  Gramophone, April 1950 (Martinon: Ravel)