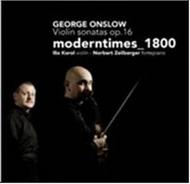 George Onslow was a French pianist-composer with a British father. He was born in 1784 and later studied pianoforte in London with Dussek and Cramer and composition in Paris with Reicha. In the course of his life, Onslow primarily wrote chamber music, string quintets and quartets and piano quintets, duos and trios, and a few symphonies. This brought him fame in Europe, above all in Germany, Austria and England. He also wrote three operas, but these were not really successful.

The Duos Op.16 were written in 1819 and published a year later in Vienna. The string instrument printed on the score is designated as "violin, viola or violon-cello", but Ilia Korol opted for the violin, as he feels that the violin provides a better contrast to the partially dense structure of the piano part.

Modern Times_1800 is a young Austrian chamber orchestra based in Tyrol comprising international specialists. It was founded in 2003 by Ilia Korol and Julia Moretti who set out to form an ensemble from a new generation of musicians, proficient both in historical performance and in the music of the 20th century.

Ilia Korol hails from Kiev, studied violin under Abraham Stern and Marina Iashvili at Moscows Music Academy and since 1997 has lived in Austria. In recognition of his artistic achievements he received Austrian citizenship in 2001. He has performed as concertmaster of the Musica Antiqua Köln, the Bach Ensemble with Joshua Rifkin and the Spanish Baroque Orchestra RCOC and is also a member of the ensemble Ars Antiqua Austria and the Clemencic Consort.